In 2016, we did a little work on on brake stow construction. What follows is a summary of what is currently the standard, how our products are built, and what we think can be improved. 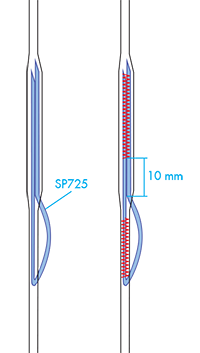 Most BASE canopies (including all Squirrel canopies) use 900lb Dacron from CSR Braids (USA) for the main brake line. The actual brake stow material used for the cat-eye varies, but the end result is similar across leading manufacturers: A brake line stowed in the slider down/off LRM configuration has a breaking strength from 400-600lbs (1.7N-2.7N). Using traditional construction techniques, the strongest stow that we tested failed at 2.8N or 630lbs force. The mode of failure was consistent across all lines tested: as the brake line is loaded, the toggle intersects the line of bartacks in a shearing manner.

Failing brake stows aren’t a major topic of conversation in the BASE world. This is partly because the failures typically occur in situations such as long slider down delays, or on worn gear. Intuitively, most BASE jumpers know that if we are taking long delays slider down with a fully vented canopy, the opening is going to be pretty hard and hard openings can stress our equipment. Also, most BASE jumpers understand that the difference in opening force between 4 and 5 seconds is much greater than that of between 2 and 3 seconds. As we push the envelope, the risk does not increase linearly.

The current trend of more jumpers pushing the limits further is likely to continue. So what should be normal? In situations where the delay is longer than average, the exit weight is high, or the equipment is well used, it is not rare for brake lines to fail at the stow. Enhanced-strength brake stows have been experimented with over the past ~15 years, but the current setting used by all manufacturers has become standard because it is the simplest to install.

The first generation of Outlaw brake stows are as strong or stronger than other standard stows. However, we think it may make more sense for the strength of the stow to be closer to the strength of the line, and also to the strength of the stow-loop on the riser. For that reason, we have redesigned the brake stow to increase strength while maintaining the same function and ease of use. The Squirrel BASE canopy brake stow involves a tacked loop of 725lb Spectra secured inside the traditional 900lb Dacron main line (construction detail in the diagram at left). It prevents the shearing action as the toggle interacts with the loaded line. Instead of the toggle edge meeting bartack stitches at 90 degrees, it encounters a loop of 725lb Spectra inside the main line. There is no functional difference from the user’s perspective, yet it is proven to be significantly stronger (see chart) than current standard brake stows. Construction is slightly more complex, and replicating this technique in a custom brake stow requires a slightly higher level of sewing expertise. Squirrel BASE canopies are delivered with factory deep and shallow settings that are optimized for the typical exit weight of each size, with the intention of minimum forward speed in DBS.

We keep the new reinforced brake assembly (a full set including main and upper control lines) in stock and available for free to any pre-2016 Outlaw owner that wishes to install it.

Cheers, from all the Team at Squirrel.