All About Brake Settings! 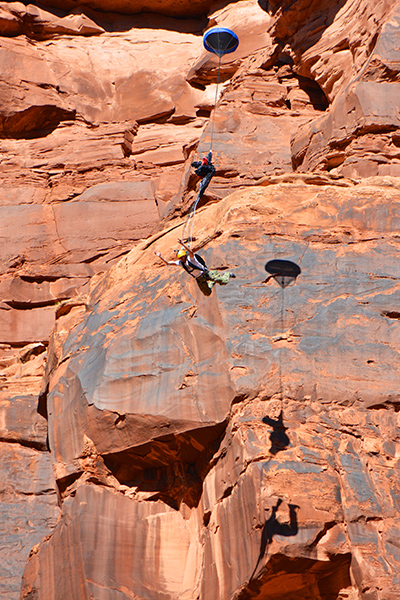 Lately there have been reports of several wall strikes after no-slider openings with brakes set to “shallow”. In general, we are not dogmatic about packing techniques or gear configuration – we believe each jumper should do what works for them. But we also believe that it is critical to understand what you are doing to yourself. Shallow brake settings for no-slider jumps are sometimes appropriate, and desirable. But it is inaccurate to say “Shallow Brake Settings are better for no-slider jumps”.

We first need to understand where multiple brake settings came from and what purpose they serve. Because if shallow brakes are all we need, why would deep brakes have been invented in the first place?

In the beginning, there was one. One lonely brake setting, which ruled them all.

*Note, this brief history is a massive generalization and totally skips over individual or random cases of rigging which may have occurred before DBS use became widespread.

Over time, BASE canopies got better. Soon, it became apparent that it was possible to stow brakes in a deeper setting than what was commonly used for skydiving. Interestingly, it was discovered that this setting could be even deeper in cases where the parachute was being used without a slider – the ideal deep setting for no-slider jumps was actually too deep for slider-up openings. Once this was discovered, it became clear that multiple brake settings were needed for BASE canopies.

The reason that the deepest deep brake setting was inappropriate for slider-up openings is because the parachute will open in stall. This is due to several factors: when the slider is high on the lines, the brake line must travel from the riser to the slider grommet and then to the trailing edge, which restricts the trailing edge more and increases brake influence on the canopy in this brief moment during the opening process. As the slider descends further down the lines, more brake influence creates a higher AoA, putting the canopy closer to stall in a situation where the inflation and expansion is being restricted by the slider. And finally, a bit of forward movement, such as while tracking or wingsuit flying, will also increase the AoA of the inflating parachute. These are the reasons that the original, single, “shallow” brake setting is still used for slider-up openings in BASE. That “shallow” setting isn’t shallow as much as it is “standard”. It’s the same setting that your BASE parachute would have if it were a skydiving main.

That shallow setting, when used for no-slider jumps, causes a more pronounced surge into flight. The transition from packed to flying requires a forward surge by the parachute. This surge during opening is more pronounced in shallow brakes because the canopy is less restrained (we are referring to the surge from inflation to flight, not the surge from stowed to unstowed brakes).

But, back to the deep setting: the reason a deeper setting was discovered to be an advantage in BASE is because a parachute flies at a lower airspeed when brakes are applied. Now this might seem obvious, but hang on, it’s important that we cover the basics. Minimizing the forward speed of your parachute immediately after opening gives you time if, heaven forbid, your parachute should open facing the object that you just jumped from. In the event of an off-heading opening, the slower your parachute is flying, the more time you have to correct the heading. The more time you have to correct the heading, the better your chances are of not hitting the object. And if, heaven forbid, you do hit the object, you will hit the object with less speed. To recap: having more time to correct your heading is good. Not hitting the object is good. 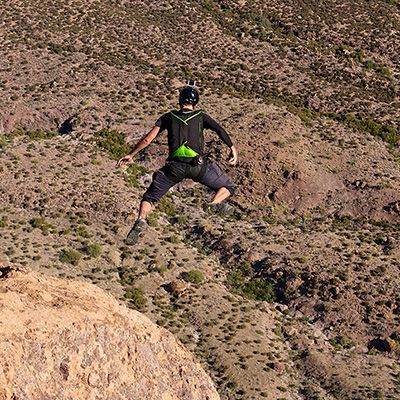 Johnny jumps from a 400’ object that is 400’ from exit to impact. The object is a sheer cliff with a usable landing area near the base of the object. There is zero wind. Johnny is going to do a poised exit with an average push that will gain him about 20’ of object separation after a two second delay. He is using a 42” PC and is jumping his BASE canopy at the recommended wingloading of 0.73. Johnny read the manual and is jumping with a Deep Brake Setting that has been verified to work for his wingloading. Johnny takes a two second delay, and after his parachute opens he will have about 150’ of usable altitude left beneath him.

On opening, Johnny has a 180, oh no! Suddenly he has a close-up view of the sandstone face that he was admiring from the trail. Johnny’s parachute, being in deep brakes, is very close to stall. For that reason, Johnny is moving towards the cliff face at approximately 6mph. With 20’ of space in front of him, he has approximately three seconds from the time that his parachute inflates and starts to move forward, until he impacts the cliff face. That is enough time to say, “Oh-crap-nuts-balls-ass-NO!” and then BAM, his trip to the hospital begins.

Three seconds is enough to reach up, grab something, and pull on something until the canopy turns 90. Hopefully that something is going to be one or both of his rear risers, or one or both of his brakes. It doesn’t matter what he grabs – he has 150’ of usable altitude, which is enough to make at least a 90 degree turn using risers or brakes (STOP YES OK THAT’S COMPLICATED, MORE ON THAT LATER!). Once he completes that 90 turn in less than three seconds, which is very doable, Johnny is basically out of the woods – he’s not going to the hospital anymore, he’s just going to the landing zone and then to Eddie McStiff’s.

Johnny decides that since Deep Brake Settings are old news, and the old guys who told him to use them are old, and the new trend is to use Shallow Brakes, he is going to try it. All terrain, condition, and delay factors are the same. Upon opening, Johnny finds himself in exactly the same location – his parachute consumed the same amount of altitude, he has the same amount of usable altitude beneath him, and he is exactly 20’ from the cliff face, with the same amazing up-close view of it. Only this time, Johnny has less time. Instead of having enough time to say “Oh-crap-nuts-balls-ass-NO!”, he has enough time to say “Oh-crap” before impacting the cliff. Before his desperate, gaping mouth can scream the “n” in nuts, he smashes his face on the rock.

That is, unless, Johnny has secret ninja powers. Ah ha! I forgot to tell you, Johnny is a freaking NINJA!!! In less than two-tenths of a second, Johnny reaches up, gets both of his hands exactly on both of his control toggles and unstows / clears them, gives one toggle full input and releases the other upward into full drive, and his canopy makes an instant 90 and he just barely grazes his end-cell on the cliff face and flies away safely.

Actually, I’m just kidding, Johnny is not a ninja and after impacting the cliff with his face, hands, ankles, and knees, and then riding it for 150’ into the talus, he went straight to the hospital and now he is hooked on fentanyl and his girlfriend recently dumped him.

We can’t be completely sure, but you might not have secret ninja powers even though most BASE jumpers we know have short reaction times. Our reaction times would be well-tested in the first scenario, where Johnny has three seconds to turn his canopy at least 90 degrees. Our reaction times in the second scenario, where there is only enough time to scream “Oh-crap” would be strained. That is why almost all of our friends who have been BASE jumping for a long time choose to jump in deep brakes for almost all slider off applications: to reduce the chances of a hospital visit.

In scenario 1, hopefully you are benefitting from the increased heading performance of a static line or PCA deployment. Static line / PCA heading performance is generally very good, and the main concern on these super low jumps is having enough altitude to un-stow brakes, allow your canopy to surge forward to trim speed, and then flare: we are talking about canopy rides in the <5 second range, generally from objects of less than 200 feet. In these rare cases, shallow brakes are a strategic decision that is made after a cost/benefit analysis of the factors.

Saying that shallow brakes are just “better” for all no-slider jumps is not generally accurate.

Here are the most prevalent myths that prop up the “shallow brakes are better” blanket statement:

Finally, let’s try to get an even deeper understanding of what this means to you, regardless of the parachute you jump or where you jump it. Shallow Brakes, Deep Brakes, Brake Settings… when you look at your canopy, it doesn’t matter which is deep and which is shallow or which one you use. What matters is that you choose a brake stow position that gives you the appropriate forward speed for your application. Every jumper needs to understand what that appropriate forward speed is for each situation, and how to get it. Thankfully, it’s simple: The appropriate setting creates a forward speed that gives you enough time to turn your parachute 90 degrees in the event of an off-heading.

If you are jumping a bridge, and a 180 means you aren’t going to hit anything or miss your LZ, then you can stow your brakes wherever you want.

If you are jumping a cliff, and your factory Deep Brake Setting is too deep, meaning that your canopy opens in stall or too near stall for comfort, then you might consider using your shallow brake setting (what?? Yes!) if your canopy flies slowly enough in shallow brakes. Yes, you read that correctly. It’s not about deep/shallow in the end, it’s about giving yourself enough time to make a heading correction. Time comes from slow forward speed. If you get that from your shallow brakes thanks to them being installed deeper than average, or thanks to you loading your canopy very lightly (usually in the <0.69 range), then ok!

If you are jumping a cliff in deep brakes and you don’t have time to make a heading correction before hitting the object, then you might need to tune your DBS. Maybe your deep brakes aren’t yet deep enough (this can be tested at a safe span object before you go to a cliff). Or, maybe you’re a stoney sloth with slow reaction times and / or you chose the wrong exit point. What we are trying to say here is that it’s not only about the setting, it’s about your forward speed. Choose a configuration that gives you the proper forward speed for each object / jump.