Choosing Lines For BASE

Dacron, Spectra, or Vectran: Breaking it Down

Choosing which lines you need on your BASE canopy is actually a very simple process, so if you don’t want to read a long article, here you go: If your BASE canopy will be used almost exclusively for jumping slider up, and you want to minimize weight and bulk, then choose Spectra. For almost any other scenario, Dacron is the answer.

So what else is there to say? And what about Vectran? For those of you who want to know the background on this simple advice, or are curious about what these words mean, here are a few more details on each line’s properties. 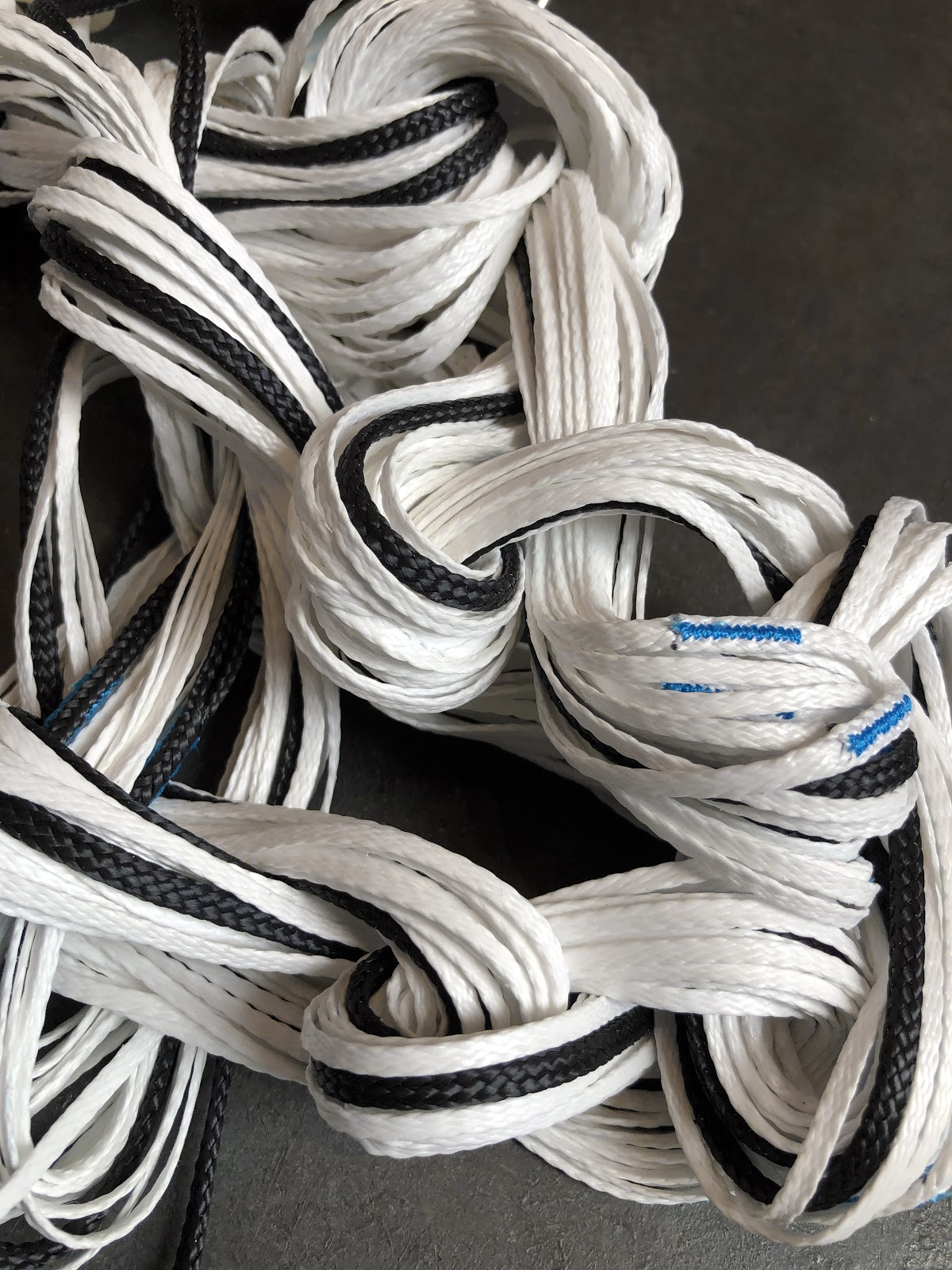 Both are: Ultra-High Molecular Weight Polyethylene, or UHMwPE.

Spectra is a trademark name of a yarn product manufactured by Honeywell in the USA. It is molecularly identical to Dyneema, which is manufactured by DSM. This material is pretty cool stuff, and it’s worth learning about it. The Epicene is made with Spectra, and this line is an option for Hayduke as well.

Spectra has some unique characteristics that make it especially well suited for use in certain parachute designs. It is strong, light, doesn’t absorb much water, and has good UV resistance. It ages well, with minimal “furring” and is dimensionally stable enough for low performance parachutes (which describes every BASE canopy ever made).

Here's why we love it for BASE canopies:

Downsides to be aware of:

There is a >90% chance that if you’ve ever seen Spectra (sometimes called “microline”) on a parachute, it was made with Honeywell yarn, by CSR. Here’s how Frank, the owner of CSR, describes the manufacturing process:

“Spectra arrives at our factory from Honeywell in a tube of yarn. We load the yarn into the braiding machine, and begin to braid a line to a specification. First, we braid about six feet of line through the machine, then stop it, and cut the line. That line – the first few braids of every single braider setup every day, is tensile tested before continuing. If, for example, they braid a 1000lb spec line, the tensile test must show a strength of at least 1100lbs in order for production to continue. “We’re not making clothesline”, Frank says, and the QC procedures at CSR are intense. Once approved, the braider will continue to produce around 5,000’ of line over a 20hr period, which accumulates on a supply reel.

From there, the line is taken to another zone in the plant, where Frank’s brother, Tim, oversees the rest of the process. The next step is to pre-tension the line at about 80lbs, in an untreated state. This dimensionally stabilizes the line so that its length remains as consistent as possible through the inevitable load cycles in its future. After stretching, a water-based urethane coating is applied, the excess is squeegeed off, and the line is cured for three days. It’s then put onto another reel, stretched a second time at 80lbs, and rolled onto shipping spools. Before shipping, sections of line are randomly selected for tensile testing a second time.”

Honeywell’s yarn, and CSR’s manufacturing process, are consistent. CSR fails very little yarn, and braided line tests rarely result in failed batches. At Squirrel, we frequently test components built with CSR line, such as soft links and parachute line, and CSR’s rated strength has been exceeded in every scenario.

Interestingly, the lower the line’s elongation, the more the variance is between tests. The higher the elongation, the more consistent it is with a narrower range. For instance, testing five pieces of 1000lb Spectra line may result in failures between 1150 and 1300lbs, but the comparatively elastic Dacron line will usually present a smaller window – more along the lines of 5-8%. 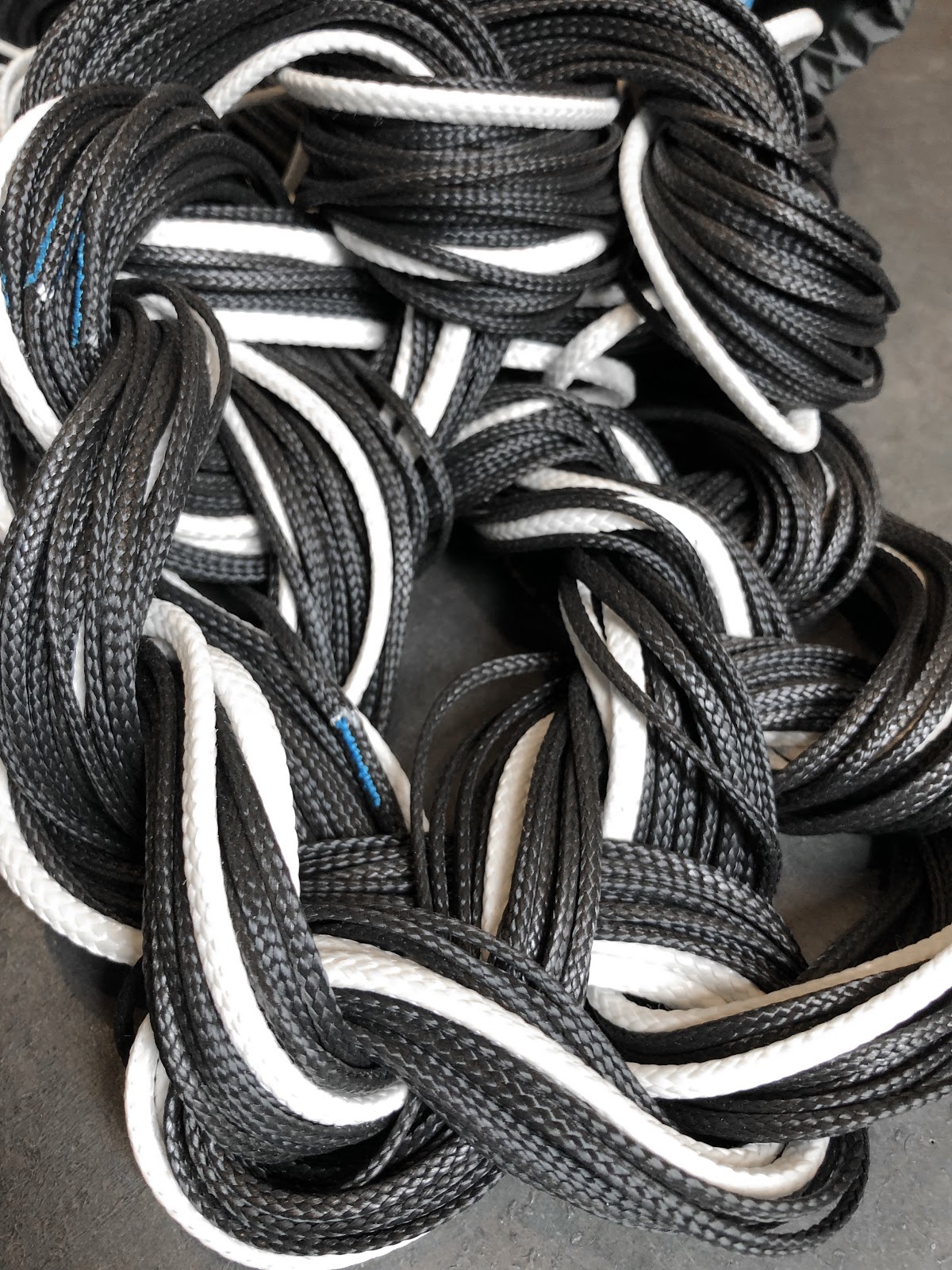 Polyester at its base, Dacron™ has enjoyed a very long history of use in skydiving. Like flubber, you can beat it up with a parachute opening and it will return to its original shape quite predictably. It is resistant to heat, has a nice amount of elasticity, and is generally easy to use. Dacron molecules are not organized into such long chains as Spectra, meaning that more yarn is needed in each braid to achieve the same strength, therefore pound-for-pound it’s thicker.

Dacron’s elasticity suggests that it is more “forgiving” during the opening process, which can benefit us in several ways. It provides a bit of shock absorption for hard openings. If you’ve ever jumped a Spectra lined-canopy slider off for more than a one-second delay (not recommended), you will understand this difference first-hand, and it’s hardly debatable. So for slider down applications, Dacron is a no-brainer and is currently the best thing going. For slider up openings, its shock-absorbing properties apply equally well. While the staging of the parachute opening by way of slider reefing is the most important factor, a bit of cushion is undoubtedly a benefit.

From the polyester family of materials, Vectran™ is a liquid crystal polymer manufactured in Japan by Kuraray. Vectran can be found on some BASE canopies, but we do not offer it as an option at Squirrel. While we don’t think it is a bad choice, we do think that Spectra is a better choice, achieving similar goals with a more desirable balance between strength, durability, and ease of use. Spectra and Vectran lines are comparable in terms of weight and diameter, but Spectra wears better long term, absorbs less moisture, furs & frays less over time, and is generally more durable (when pitted against UV exposure, bending tests, and even Velcro-abuse, Spectra wins hands-down). Vectran beats Spectra in only one category: dimensional stability (trim).

We get to deal with Teijin and its subsidiaries because we order para-aramid materials and Teijin-Frontier cloth, and have studied aramid-fiber-woven fabrics for our wingsuit applications. Technora is an excellent material with applications far beyond parachute line. It is a co-polymer fiber that is eight times the strength of steel, with excellent heat, UV, and chemical resistance. It’s dimensionally stable, which made it attractive for parachute line applications in the past, but it is no longer as popular as it once seemed it would be in the category of high performance parachutes… again, a category that BASE canopies do not fit into.

TECHNORA has not yet found an application in BASE because it doesn’t seem to provide meaningful benefits compared to Spectra or Vectran, even though, pound-for-pound, it’s smaller in diameter and the elongation properties are not worse than Spectra or Vectran in the category of openings. One significant downside is that it has a reputation for being more fragile than other line types as a result of it being more susceptible to degradation when fibers are exposed to the dirt that BASE jumpers tend to play in.

It is one of the most common info-nuggets in skydiving: “Microline” (Spectra, or UHMwPE), shrinks over time due to the heat-based friction of the slider grommets traveling down the lines. This is said to be the cause of skydiving parachutes “going out of trim” over time. It is said that the reason the outer lines shrink compared to the more central line groups, is due to the slider friction. Is this conventional wisdom true? Well, not according to the engineers who manufacture this molecule and braid it into cord.

There is one basic fact about parachute openings that contradict the conventional wisdom:

“It's not heat, but "less stretching" that causes the length differences across the span of a parachute over time. The effect is minor on BASE parachutes that have relatively hard openings, because during the opening phase you have a more even load spread across the span and chord, and a significant enough load to restretch the entire lineset adequately. It's much more problematic on foot-launched canopies (i.e. Paragliders) because the lack of opening sequence force results in the C and D line groups shrinking significantly more than the more heavily loaded front riser lines (even when we use lines of different diameters in order to size each line proportionally to the load).

Because of the load-unload cycles, line length discrepancies emerge. The effect specific to UHMwPE is called creep deformation, and although the primary phenomenon in the literal sense (shrinking or elongating at the intra-molecular level) is only part of the story, its macro effect makes the braid shrink in significant proportions due to the displacement of the yarns relative to each other when the line is unloaded and manipulated, combined with a slowly increasing inter-yarn friction as the line accumulates dust during its lifespan.”

Simply put, the central lines on your parachute (the ones which, coincidentally, experience what is perceived to be less “friction” on the slider grommets) experience higher loads than the outermost lines on your parachute. They are loaded first, and for longer, during the opening phase. The extra loading “re-stretches” lines in this part of the canopy, while the outer lines are loaded less. The outer lines are seen to be “shrinking” compared to the central line groups, but it is not because of heat - instead, it is due to a lack of constant “re-stretching” that the central lines experience.