Some Thoughts on Terrain Flying 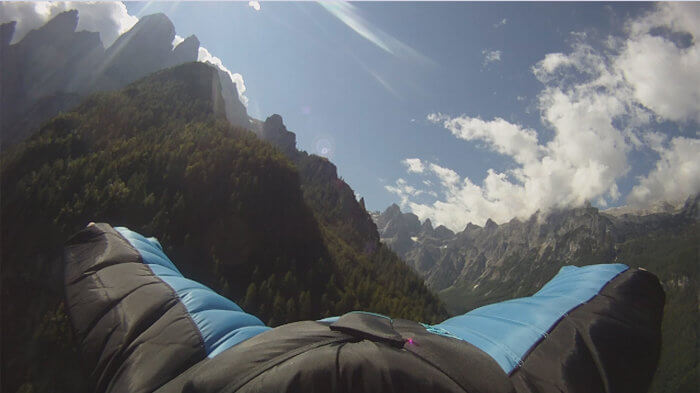 Andy West once said, "Proximity Flying is the hook-turn of BASE". I think he's right. Flying close to terrain in a wingsuit is exhilarating, challenging, and risky. The major risk is a quick death after a slight miscalculation. The rewards are an incredible sensation of speed and, for some, the perceived adulation of your peers (Some people will truly kill themselves to get what they think is impressive video). The rewards, compared to the risks, might be crap. But for those of us who can't fly fighter jets, the sensation of flying close to things in a wingsuit is worth the risks.

Flying near terrain in a wingsuit is not about reaction times - if you have to react to a situation, it's usually too late. It's more important to anticipate; to look ahead into your future, and know what to do (And what you can do!) before it's time to do it. Understanding glide paths and learning the limits of your glide range is something that can't be effectively practiced in the skydive environment, so it goes without saying that if you want to fly close to stuff, you'll need to do a lot of fixed object wingsuit jumps first, focusing on the range of your suit and precise directional control.

With the right suit and a bit of training, you might discover that it's easier (and more dangerous) than it looks. In my opinion, the reason proximity flying is so dangerous is that it's so easy to do. Different jumpers may progress in different ways, and the vast majority of jumpers will want to progress faster than they should. I know it's boring how more experienced jumpers all sound the same when they say, "slow down". But it's good advice: Slow down.

I'm not going to write a detailed how-to list, as I firmly believe that all that is needed to fly close to terrain is a mastery of your wingsuit and some spatial awareness. Instead, I'd like to chime in with just a few general thoughts.

First of all, I would like to take the rare and perhaps controversial stance that a small suit is not necessarily safer than a larger suit. Certain large suits are easier to fly than some small suits - that's just a fact. Adhering to the "Smaller is Safer" paradigm without paying attention to the individual jumper's comfort level and amount of experience in a given wingsuit is very short-sighted. The wingsuit that you should begin BASE jumping with is the wingsuit that is easiest for you to fly - the only caveat being that, in my opinion, with your first suit (and why not all of them) you should have instant easy access to both your PC and Brake Toggles. 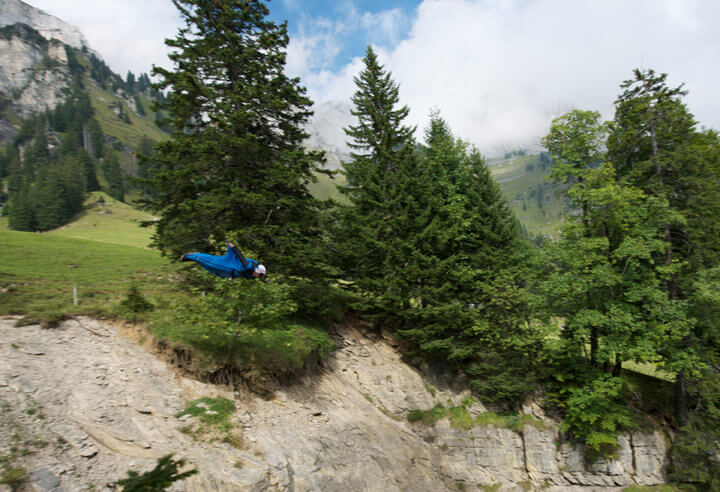 Once you begin BASE jumping (I know I sound like a broken record here), you should make every effort to progress slowly. You're enjoying something that an almost immeasurably small percentage of humans have experienced, and that makes you very special. Even more special than your mother ever imagined. So calm down and enjoy some straight and simple flights. Learn the range of your suit by experimenting with angle of attack and finding your position of max glide. Try to get your suit started as fast as possible - don't let yourself fall into the habit of needing a long dive to get flying well. Pull high and practice getting your risers and toggles into your hands as fast as possible, and perfect your pilot chute toss. And finally, learn to fly far before you try to fly close.

The art of distance flying is being overshadowed by the crush of "proximity" flight videos. However, no wingsuit pilot is worth a shit unless they can achieve AND SUSTAIN a respectable glide ratio. Getting short spikes on your GPS doesn't count - what matters is a long and consistent average throughout your entire jump. Practice repeatedly from one exit and try to increase your distance while still pulling at a safe altitude. At the end of your flight the easiest way to get a few more meters of distance is to pull low, but this is also the stupidest way. Compete only with yourself, and stay responsible.

Flying close to terrain should involve increasing your speed by decreasing your angle of attack, and flying down to a terrain feature or a spot on the wall. You should never ever attempt to "fly over" something - instead, fly down to targets. Flying close to the wall, laterally, will require a rapid horizontal trajectory adjustment, which is not a wingsuit's strong point. Wingsuits don't "carve", instead they "drift" in a turn, probably much more than you realize. So never put yourself into a position that will require a turn to miss an object. To put it simply, the easiest way to fly close to something is to dive down at a piece of terrain that requires a comparatively steep glide angle to reach. You will then have plenty of speed and energy to use to "pull up" ("pulling up" is literally inaccurate, but perhaps best describes the act of momentarily converting speed to an increased glide angle) and clear the object comfortably. 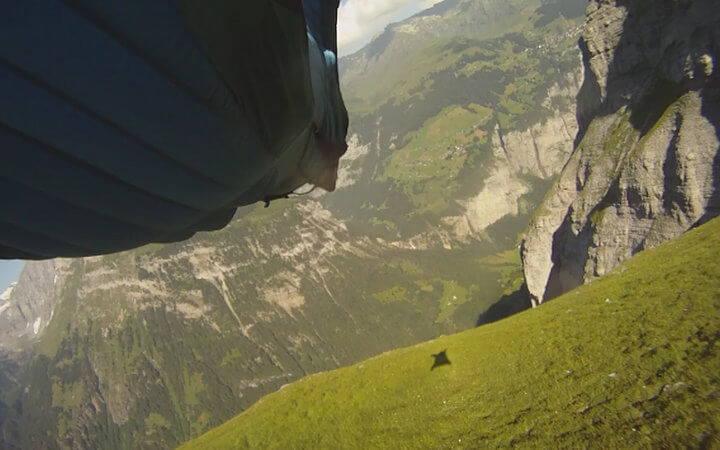 Both my personal experience and also the circumstances of most wingsuit fatalities suggest that turns near terrain are probably the most difficult and dangerous part of proximity flying. Flying a line that requires a turn in order to avoid terrain can be complex, and the severity of the turn is proportionate to the complexity and danger of it. Plenty of proximity fun can be had with relatively straight lines, so save the turns for later and begin executing them very carefully. While you are skydiving it is not possible to understand the amount of drift or slide that you are experiencing in a turn but, believe me, it is significant. Flying a wingsuit is much more like driving a go-kart on an oiled slick-track with bald tires than it is like driving a real sports car. You may feel like a quickly-banked wingsuit turn is efficient, but you won't understand the amount of drift (and sink) until you can measure it while flying over something. Detecting drift while turning near a wall can also be difficult due to the need for highly acute depth perception, which no one has in their peripheral vision at very high speeds. Perhaps the best way to practice this is to fly a slalom course with only one gate. Pick a point of reference beneath your glide path, with clear air ahead and below, and make a turn around it. You may find that your turn goes wider than you originally expected.

In summary: master your suit first in the skydive environment, and then in the BASE environment during straight jumps away from the wall. Never try to fly over something, always fly down to it. And be careful with the turns. Most of all: fly only for yourself! Forget about the video and just focus on enjoying the fact that no matter how simple your flight is, you're a very lucky human being. We live in an amazing time, and we should all be very thankful. I know I am.