A Few Things You Should Know About Pilot Chutes

By Matt Gerdes and the Squirrel / Asylum Designs Team

Your pilot chute is the first link in the deployment chain. While skydiving, it is responsible for overcoming the friction between your main container and your deployment bag, and then getting your d-bag to line stretch with minimal drama. If your PC is underpowered or unstable, your d-bag will be more likely to rotate (particularly in any wake turbulence from a wingsuit). While BASE jumping, your PC is responsible for extracting your parachute packjob and delivering it to line stretch. The nose of your parachute, pointing into the relative wind, weighs heavily on the heading of your opening. If your PC pulls off the line of tension, it will likely result in an off-heading. If it oscillates enough, it can give you off-headings and/or line twists. Remember that while the PC's role in heading performance can seem small, it is often larger than you think - particularly in wingsuit flying. If your PC induces a slight off-heading, and the opening is hard, your body can rotate under your "almost on-heading" parachute, leading to line twists (body twists).

There are no good reasons to be casual about pilot chute selection if you value your safety. While no equipment can mitigate all risks, good and properly manufactured equipment help give you the best chance of success.

Lately, we have seen and heard people giving advice along the lines of “Don’t worry about your PC, just have good body position.” All factors are important. Here are a few choice comments and our thoughts on them. Since our sport isn’t on Snopes.com’s radar, let’s fact-check a bit of internet advice:

A Truer Explanation: There is no instance in which pilot chute stability becomes unimportant during a normal deployment. It is a simple fact that an oscillating or otherwise unstable PC will negatively affect the heading performance of your parachute. An unstable PC is capable of inducing line twists. Even if it does not oscillate enough to completely rotate your packjob, a small off-heading can lead to the jumper rotating beneath the canopy. The effects of a pilot chute at terminal are sometimes less perceivable, which can lead to the assumption that the PC performance is less critical than it really is.

"All pcs do the same thing." (Paraphrasing a comment by someone trying to convince a jumper that PC quality was not something he should worry about). False, if safety matters to you.

A Truer Explanation: Yes, they all (hopefully) extract your parachute from its container. This statement is true in exactly the same way that the following is true: "All boats do the same thing". What boat do you want to sail on the open ocean? What boat do you want to row in a pond? Choose the right tool and, while you’re at it, why not go ahead and choose a quality tool?

"Other factors are more important," (Said a guy who then listed the other factors involved - you know, body position and stuff). Misleading.

There is no clearly prioritized list of factors. Parachute openings occur in a chain of events, and each event needs to go pretty well. If one event goes terribly, it can overpower other factors. If one event goes perfectly, it cannot necessarily overpower other negative factors. Thinking that "If I just get these three things right, I'll never have an off-heading and I don't need to worry about the fourth thing", is foolish. Successful jumpers make all efforts to ensure success, and embrace the quest for improvement. Saying “Just have good body position and you’ll be fine” is too simplistic and reductive. The main factors are, but not limited to; Symmetry of body configuration, PC performance and the jumper’s influence upon it based on throw / deployment, method of packing and how the parachute presents itself to the relative wind, ambient weather and its effect on a deploying parachute, and interaction between the parachute and container during extraction.

"There is only one type of PC to do the job," said a guy who swears by his magnificently perfect PC. Not so much.

A Truer Explanation: While I do recognize the valuable placebo effect of owning a piece of gear that you firmly believe is perfect, other valid options exist and we benefit from keeping an open mind. If your PC is stable and gets you to line stretch when you want, then it works. If your PC is unstable, then you could benefit by getting a better one.

"Buy a cheap one at first and then get an expensive one later." Highly Subjective.

A Truer Explanation: BASE jumping is not a cheap sport. Let's posit that a high quality PC will perform only 1% better than a low quality PC. If your life depends on each event in that deployment chain going according to plan A, then wouldn't you pay a little extra for a 1% better chance of living? Would you pay extra to reduce the chances of having to deal with an impending object strike by just 1%? Evidence suggests that higher quality PCs perform better.

"Symmetry isn't that big of a deal." Super False.

"How you pack it doesn't matter much." False.

A series of wind tunnel tests of various 42" PCs deployed at an airspeed equivalent to a 1 second delay showed that the single largest predictor of inflation speed was packing method. At a 1 second delay airspeed, you can control the inflation speed of your PC by packing it well or poorly. If you want your PC to open and function immediately, extend the centerline from the attachment point and do not wrap the skirt tightly around the mesh. If you're going handheld, do not fold your PC into a "BOC"-type configuration in your hand. Leave the centerline extended and the skirt loose and unfolded. 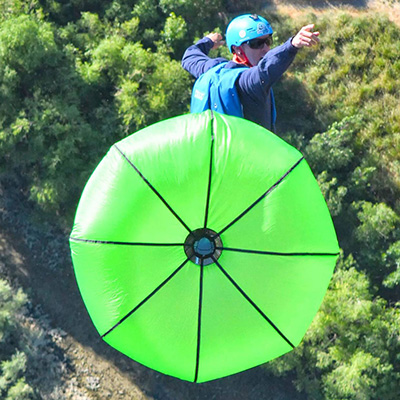 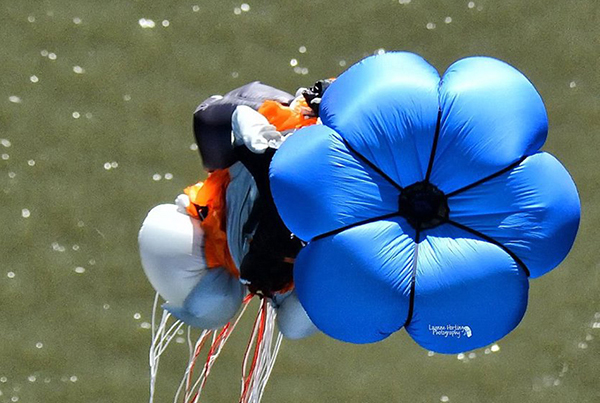 A traditional 42” PC design showing the clear difference in the inflated shape. The 2D pattern cannot form a predictable 3D shape and is constricted and deformed by the load tapes. The result is lower stability and snatch force. See: http://base-book.com/pc-extraction-and-inflation