3-Ring Risers are an option in BASE, which some jumpers choose. Because cutaways should never occur in flight, the reason that some jumpers opt for 3-Ring risers is to be able to quickly ditch their canopy, for instance in fast moving water. There are very few instances in which cutting away your BASE canopy is important, and even fewer where speed is crucial and a hook knife might be inadequate (some would argue that, overall, sewn-in risers plus a hook knife is a safer option). It is a personal decision, and if you make it, here’s some of what you should know.

During the development of our first 3-ring system, we tested a variety of existing risers and saw a range of strengths in the currently available products intended for skydiving and BASE.

In 3-Ring riser construction, geometry is a critical factor. Even a small variance of 1-2mm of ring spacing or loop length will have a significant effect on total riser strength. The spec must be consistent across all factors, from ring spacing to loop length to the radius of the main webbing bight (which is affected by how the webbing is sewn and folded in addition to any reinforcement added). The manufacturing process for Mini-Rings is less forgiving than Large-Rings, requiring tighter manufacturing tolerances, but the strength of properly constructed Mini-Rings is not less than Large-Rings.

It is very important to note that the strength of any equipment declines over time, regardless of the materials used. This degradation in strength can be severe, causing risers to fail even under “normal” use. BASE equipment has a lifespan which must be respected. To put it simply: Older equipment is more prone to failure.

During 2015 we focused our efforts on 3-ring riser design and construction. January 2016 saw the release of our updated spec, which consistently tests out to >20kN and has an optional backup cable key to help prevent accidental release. We shipped out these new risers to all of our customers (who owned a 3-ring harness) in January 2016, to use or to keep as a backup pair for their harness/container system. You can read about them in the manual here.

A sampling of our load testing is shown below. Some Type-8 risers intended for BASE jumping and currently in use failed at loads of as little as 11 kN or 2500 lbs force. Based on current trends and the likely future of BASE, we see reasons to design our risers to a high standard. Precise construction, material reinforcements, and a double cable key all increase the strength of these risers. 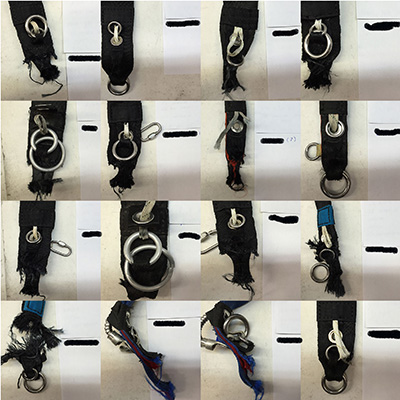 It is important to note that there is a difference between 3-ring risers manufactured for skydiving, and those manufactured for BASE. In skydiving, the requirements for overall strength in the system are lower as the forces exerted are generally lower. Secondly, it is critical that skydive 3-rings are easily releasable under load in order to facilitate safe cutaways. BASE jumping 3-ring risers are not designed to be cutaway in flight, which means an easy cutaway is secondary to overall strength.

From the laboratory testing described above, we know that well-designed and well-constructed Type-8 risers will fail at approximately 19 kN (4271 lbs) force in new condition. It is a fact that use and aging will reduce the strength of riser systems.

For used risers (i.e. risers with 5-7 years of use), a reasonable expectation of strength would be in the range of 15-17 kN. For the purposes of this illustration, let’s assume a outer-limit, but not necessarily extreme, example: Jumper exit weight of 230 lbs (~210 lb jumper, plus all equipment). In this case, the following thresholds would be expected:

Let’s start with the first scenario, assuming perfect, new equipment. How much is 18.6 G? G force is a measure of deceleration over time. In the case of a parachute opening, there are many variables to consider which will determine the amount of time consumed during deceleration.

kN, or kiloNewton, is a unit of force. 1 kN is equal to 224.8 lbs force. We can define the resistance of a system in kNs.

It should be noted that the time lapse of a parachute opening, when discussing opening force, is not measured from PC extraction or inflation. It is measured from line stretch to lower surface expansion, and the deceleration is from freefall speed to the typical vertical speed of an open parachute (10-15 mph).

For a jumper with 230 lb exit weight, wearing street clothes, a 130 mph freefall speed would be a reasonable estimate.

A note on airspeed, and density altitude: Body position is a large factor in determining airspeed. Aerials and/or instability will have a significant effect on freefall airspeed.

As air density decreases, freefall and canopy flight speeds increase proportionally. This means that the difference between freefall speed and fully open canopy speed will also increase. The higher the density altitude, the greater the deceleration.

If the speed is 130 mph, and the opening occurs over a 1s period, decelerating to 10 mph (approximate vertical speed of parachute flight), the result = 5.47 G (for 1-second opening).

Anecdotally, a 1 second slider up opening (calculated from line stretch to lower surface expansion) may feel brisk, but not dramatic or unusual.

A “one-one-thousand” count parachute opening is usually slider up, and airspeed-controlled. This would be typical with an un-vented or lightly-vented canopy deployed after tracking suit or wingsuit flight, with a mesh slider UP.

A terminal and slick opening will usually be completed in much less than 1 second from the time of line stretch to parachute flight.

If we add in a ZP leading edge and extensive lower surface venting and introduce the possibility of an out of sequence deployment causing premature slider descent or mis-rigging (canopy packed slider down), then the time consumed from line stretch to lower surface expansion will be much less.

If the opening time from line stretch to lower surface expansion occurs over 0.25 seconds, with a start speed of 130 mph and an end speed of 10mph, the result is 21.9 G (5037 lbs), which is above the tolerances for even a new 3-ring riser if loaded at 230 lbs exit weight. With degradation from 5-7 years of use, the force applied is more than 1000 lbs higher than the expected riser strength.

Note that this assumes an asymmetric loading of the parachute, where one riser is loaded before the other. A stable and symmetric deployment will result in the total load being shared across both riser groups. However, for the purposes of testing and design, we have to assume sub-optimal conditions where one riser is loaded heavily before the other, as a result of an unstable or asymmetric deployment.

We’ve all heard the term “instant canopy”. What do we mean by that? How fast can this really occur? For a terminal slider down or out of sequence deployment opening, 0.25 seconds from line stretch to lower surface expansion is not an exaggeration and has been observed in testing and field use.

Even if we give the opening more time, being completely generous and assuming a not very hard opening: With 0.4s opening time the result is 13.7 G, which is uncomfortably close to the estimated value of a used riser if exit weight is 230 lbs. 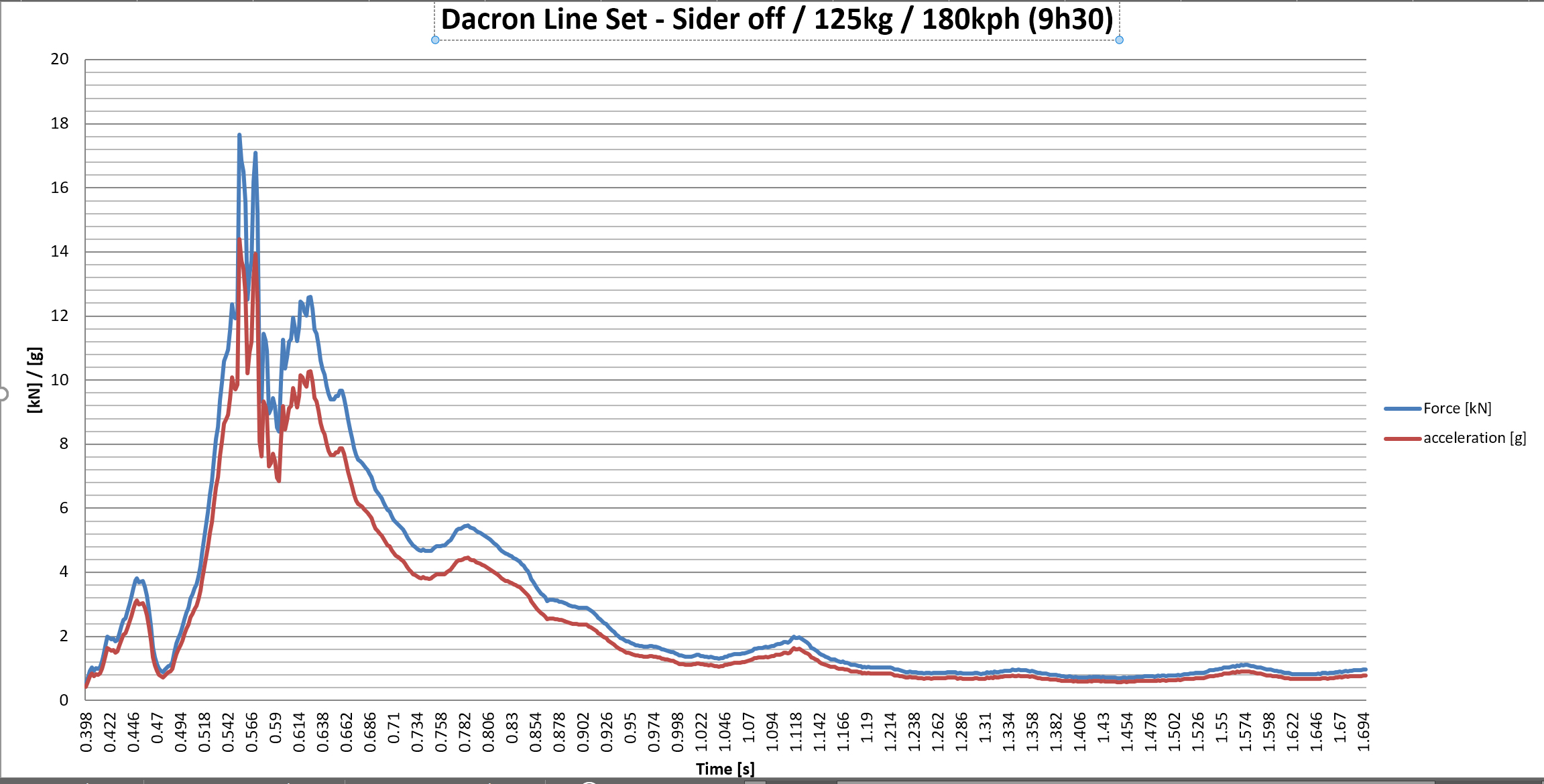 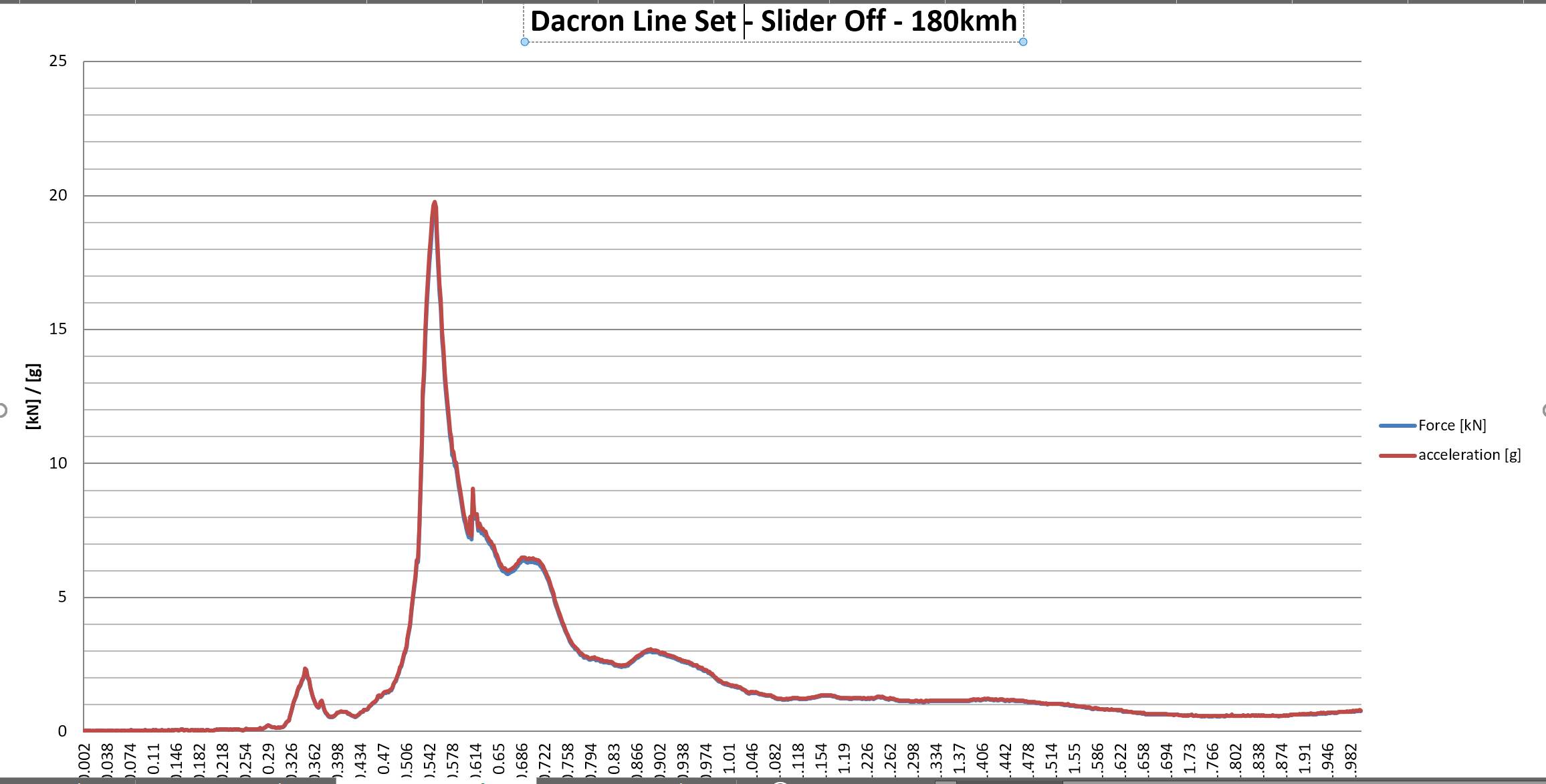 The above contains math that, while simple, may not be knowledge expected of a beginner jumper.

However, the basics are clear and simple and must be considered conventional wisdom:
Exit weight, freefall speed, and equipment configuration must be accounted for and understood. It is completely unreasonable to assume that any equipment can or should withstand any possible force. Used and aged equipment is more prone to failure. All equipment has a finite lifespan, which is determined by use, age, and exposure.

10 Critical Questions That You Should Know the Answers to:

Finally, nothing written about 3-rings would be complete without homage to Bill Booth. Thanks, Bill.
For more on 3-Ring systems, the following links contain relevant information: