Over the years, the generally accepted pre-requisites for wingsuit BASE have changed a great deal. 10 years ago, it was unthinkable for anyone except the most experienced BASE jumpers to put on a wingsuit. Nowadays, we see terrain flying videos made by jumpers who started BASE last year. Part of this could be that wingsuits have supposedly become easier to fly, but that's not entirely true. It is mainly due to the fact that we are becoming habituated to the idea that wingsuit BASE is just something that everyone does now. The mental barriers to entry have been lowered. This is not all bad, and if the general perception of the sport has changed so that new jumpers feel it is less difficult or more "normal", then they will have fewer problems adapting their minds to the challenge. But, that does not change the fact that if your exits aren't optimized for wingsuit flight, then your chances of dying in a wingsuit are massively increased.

Of the nearly 60 wingsuit fatalities on record, many of them have occurred immediately after exit. There seems to be a total lack of discussion on the proper technique for exiting in a wingsuit, and I still see "experienced" wingsuit BASE jumpers falling like lumps of poo from cliffs all over the world. It's scary, and as more and more jumpers rush to put on their wingsuits, there is no doubt that more people will die as a result of not understanding what is needed to exit safely, consistently. 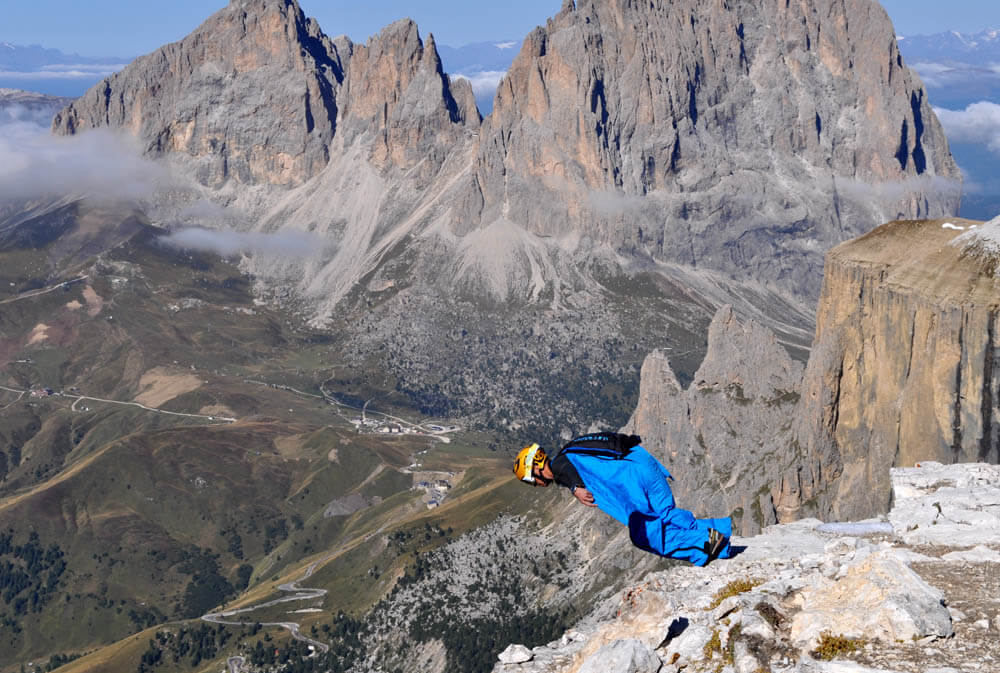 Before you wingsuit BASE jump, your tracking exits must be strong, coordinated, and symmetrical. Exiting with a wingsuit is NOT like exiting from a slider down object. Exits from "The Bridge" or from other random objects do NOT prepare you for wingsuit BASE, and if you bring the same technique to the mountains, as I have seen many jumpers do, then you will be at a huge disadvantage. Most BASE instructors teach people to exit head high, with eyes up and chest thrust to the horizon. This puts you into a head-high position which is ideal for short delays and stable vertical freefall. It does not put you into a good body position for early wingsuit flight or efficient tracking.

The good news is that a proper wingsuit exit can be practiced while tracking from slider-up objects. The main difference between exiting with a wingsuit and exiting from a low object is that a head-high position is counter-productive. Exiting "traditionally" head-high means that your body will need to pivot forward slowly while you fall, and it could take several seconds for you to reach the proper angle of attack needed to begin flight. During those seconds that your body is falling into position, you are not flying. You are not gaining separation from the object, and you are not generating lift. This terrible exit technique looks exactly like a "good" BASE exit from the 1990s: A nice arch, head up, chest out, eyes on the horizon. The only problem is that you just fell 200 feet further than you should have, and in wingsuit BASE these days a few feet, let alone 200, is often the difference between fun and dead.

The most important thing to realize in wingsuit BASE (and tracking) is that Angle of Attack is everything. AoA determines your glide and speed. The sooner you find the right AoA, the sooner you will be flying. It's that simple. And the ideal AoA is not head-high. So why not put your body into that ideal AoA as soon as possible? The obvious answer is that "I don't want to go head-down!". Of course you don't. But what you must understand is that exiting too head-high is the best way to end up head-down. A head-high exit in a wingsuit means that the momentum of your upper body pivoting down to find the correct AoA will carry you into a too head-low position before you can level out for efficient flight.

The best way to think about it is to imagine diving into a shallow pool. If you're dumb enough to BASE jump then at least once in your life I'm sure you dove into shallow water, as I have. When you do that, you don't want to hit the bottom of the pool so you jump out and you keep your body at a just the right angle to hit the water moving away from the edge of the pool. If you jump in too head-low, you hit your head on the bottom. If you jump in like you would doing a low BASE jump, then you bash your knees on the bottom of the pool. But a proper wingsuit exit gives you just enough angle for a shallow water dive. 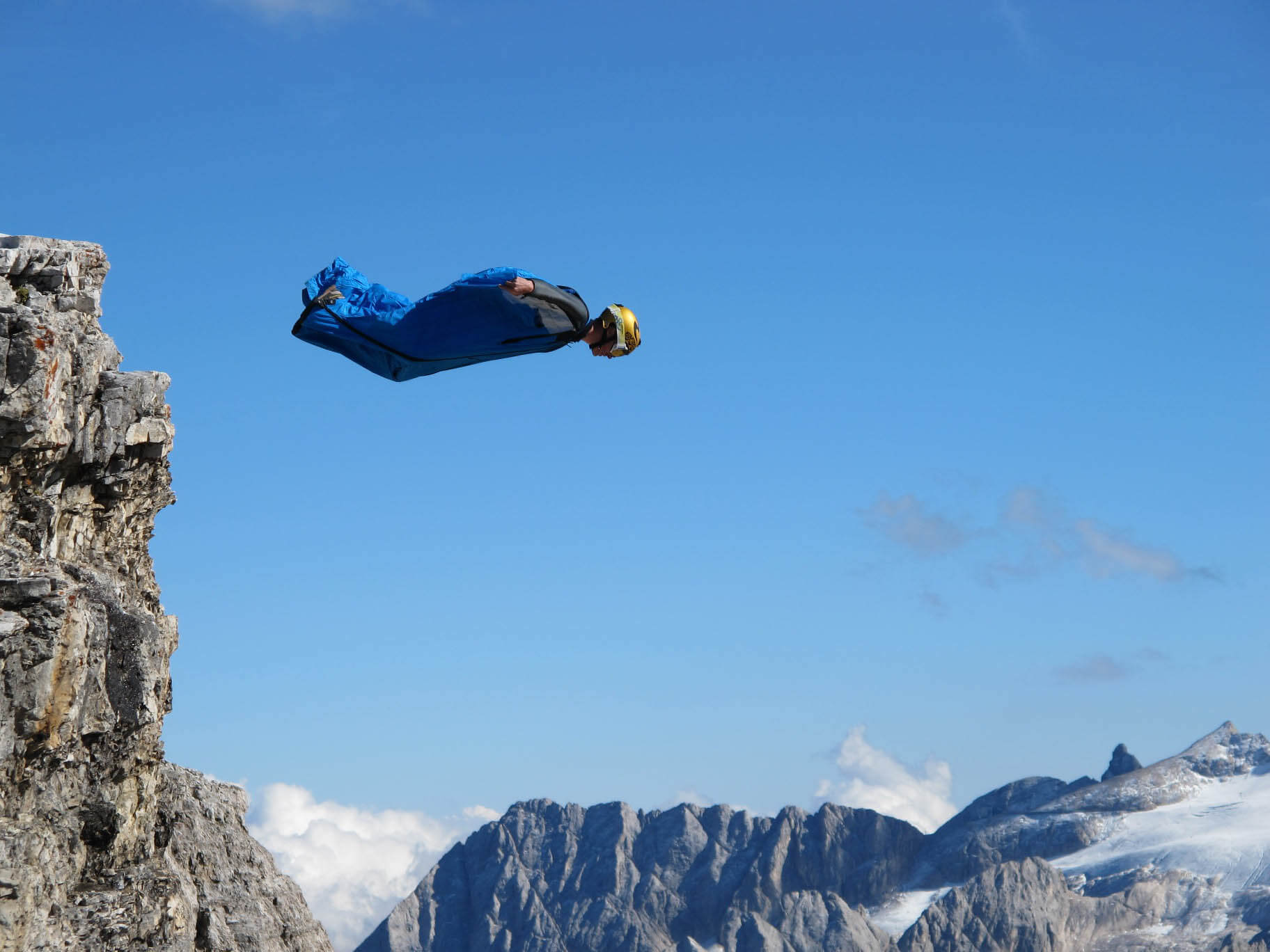 There are two main ingredients to this proper wingsuit exit:

If you're jumping up, then you can't jump out. In a wingsuit, you need to lean forward and push off the edge, away from the edge. Jumping up and falling in an arched position is almost the worst thing that you can do. What this means is that you may need to re-train yourself, and practice this skill in a tracking suit or a beginner wingsuit before taking your large wingsuit into the mountains to jump the new-school exits out there.

We hear jumpers talk about how fast their wingsuit can start flying all of the time. The good news is that some wingsuits really do start flying sooner than others, thanks to simple physics. The bad news is that too many jumpers think they need a new wingsuit when what they actually need is practice, and to reframe the perception of their skill level.

How to start fast: (Lean forward, jump out)

How to start flying slowly:

(It's his first jump, so not bad considering that, but it's not what we want in the long term)