A Wingsuit Skydive from Start to Finish

The third in a 4-part series on WS by Matt Gerdes and Taya Weiss. First article, on FFC is here, last week they covered WS exiting, now the experts go through things to think about on a wingsuit jump, from after-exit, until breakoff... 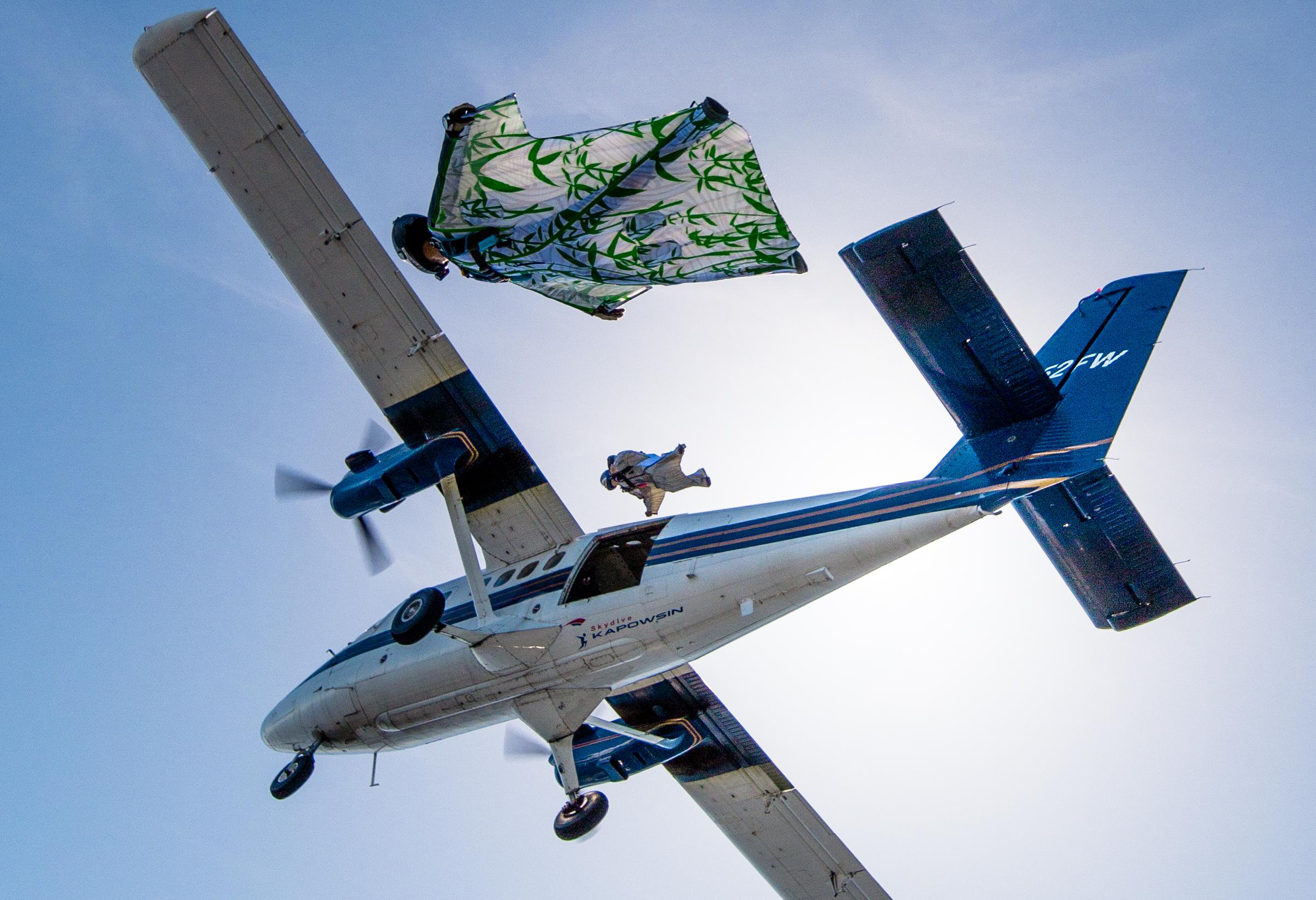 After exit, angle away from jump run — by Next Level

1. After exit, angle away from jump run.

By turning a slight 30-45 degree angle off of jump run, we decrease the chances of collisions within our own group as a result of unstable exits (unstable exits will follow a more vertical trajectory than a flying suit), and we also help to prevent collisions between groups that become more likely if the subsequent group exits directly above you. The formation base, or the first pilots out the door, should set the angle away from the plane, and jump run. If the plan is to navigate the group to a flight lane that is on the opposite side of the plane’s door, then dirt dive it and make a plan that everyone understands: when and where to build the formation, and when to begin the pattern turns. Later groups will need to give adequate separation and maintain awareness of each other. 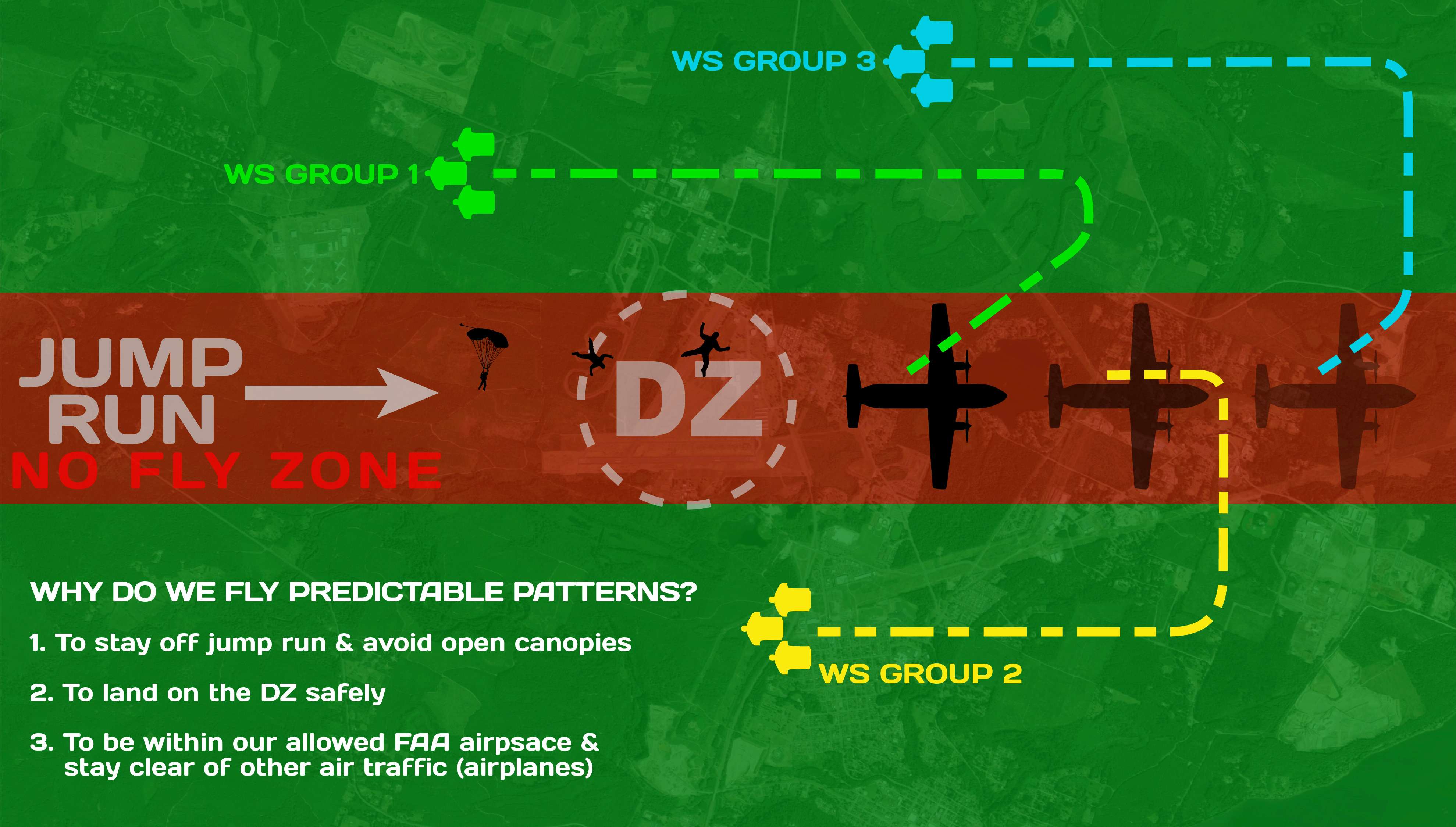 The second group, flying the right hand pattern, will need to carefully plan the formation build, and first turn, in order to not interact with the first and third groups. The third group should be watching the second group and be confident of their position and line of flight before exiting.

About that group which will be flying a right hand pattern starting from a left side aircraft door...

If it’s a tailgate aircraft, then no worries. But if the door is on the left side of the plane, this right hand pattern is not for every group, or every level of wingsuit pilot - so load the plane and plan the exit order with this in mind. The size of the group is a major factor here, and the group which is assigned the right hand pattern must either be small, or experienced (or both).

For small to mid-sized groups, the most common pain point occurs when the last half of the group finds themselves above and behind the formation, with a vertical and horizontal distance to close.

The difficulty in closing the horizontal distance will depend on the speed and glide ratio of the base, and the abilities of the trailing pilot, but generally speaking it is easier to close the horizontal gap than it is the vertical.

Closing the vertical gap is a more technical move. There are many techniques available, all of which should be explained in depth in person with video de-briefing by an experienced pilot, and none of which can really be learned from an article, but let’s cover a few basic points:

A. Don’t dive directly at the formation. Approach it safely from the side your slot is on.

B. Remember that the natural tendency when recovering from a dive with a higher forward speed than the base, is an increase in glide ratio. This means that if you dive at the formation, and then slow down suddenly, you will pop up relative to the formation. All moves to slow down should be gradual, smooth, and executed with a full awareness and view of the other pilots around you. When you are learning these techniques, practice with a coach on 2-ways and with very small groups, and start slowing down sooner than you think you might need to, until you dial in your suit's responses. When you upsize suits, follow the same conservative progression until you are capable of approaching consistently and with total awareness of others around you.

C. When diving down to the formation, aim for an empty location behind, below, and to the side of your slot. Do not dive directly at your slot.

D. You can extend your glide path instead of diving - fly out to the side, and then re-approach on level from the side that your slot is on. Always clear your airspace before all moves. 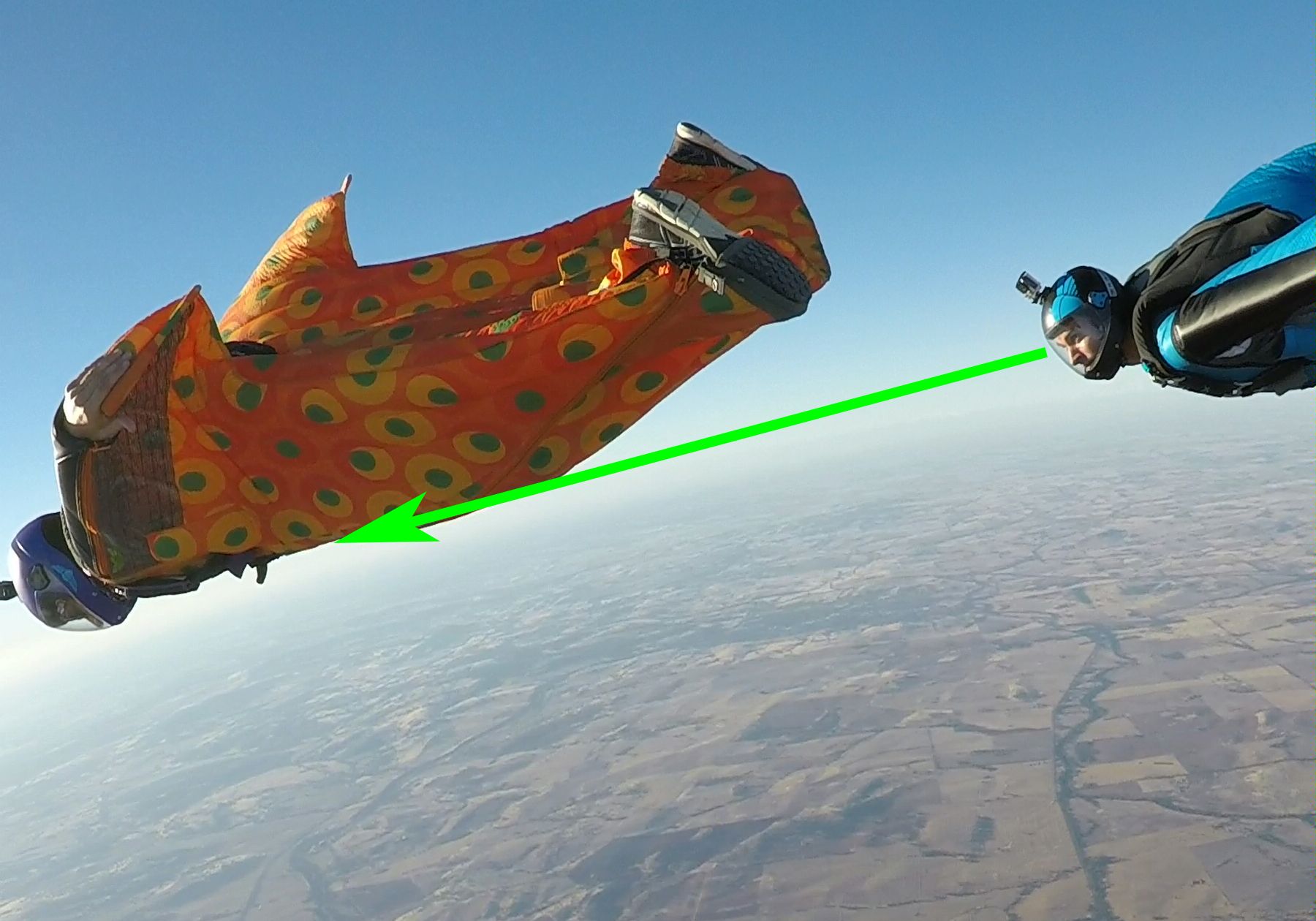 Tip: in flat formations, you should see the chest strap of the person in front of you — by Next Level

3. Holding your slot in the formation

If you can see the formation, you’re not in it. All you should see is a part of the wingsuit pilots flying next to you, and / or the base. If you are looking at the group of pilots making up the formation that you’re supposed to be inside, then you are above and behind it, instead of inside it.

Since most formations are built with the goal of each pilot being within a few feet of each other, this means that the person next to you, being 5-6’ tall, is too big of a reference. Just flying “next to” that person is non-specific, and inviting slot error. Instead, pick a point on that person. The plan should be as specific as a free-fly jump, minus the actual docks most of the time: Your hand should be next to their foot, for instance. Or, your head should be next to their hand. For your visual reference, stare at a part of their suit, such as their chest strap, or their wingtip gripper. By choosing a specific and small reference point, we reduce the variance relative to the reference. Aim small, miss small.

In flat formations, you should see the chest strap of the person in front of you. If you can see the top of their container, you’re too high.

In stacked formations, the formation should be leaning way forward from bottom to top - the pilots in the top row should have a clear view of the base pilot’s head and shoulders, and should be looking down and behind themselves to see it. 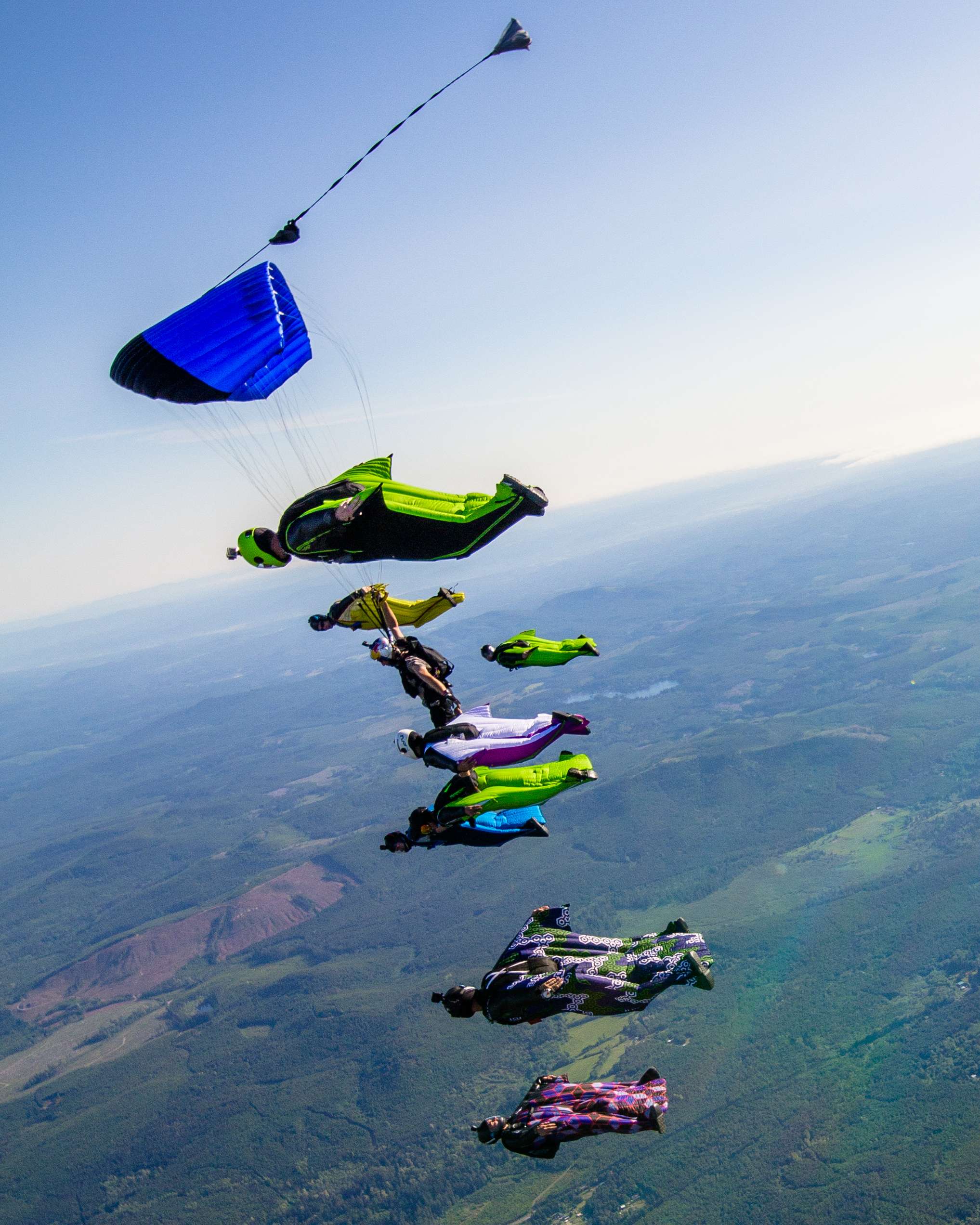 In stacked formations, the formation should be leaning way forward from bottom to top — by Next Level

The task of navigating back to the dropzone should be given to one pilot in the formation, but it is everyone’s responsibility.

Your wingsuit group must follow a specific line of flight; even if there are no other WS groups on the plane, there will still probably be other skydivers who are deploying their parachutes along jump run, including tandems and students who will be higher and more vulnerable to lost wingsuit pilots.

If there are other wingsuit groups, navigating along the intended route is critical even if you are two miles from the DZ.

If you’re at a DZ with airspace concerns, which is most DZs, then getting lost or straying from the intended pattern could spell trouble not just for your group, but the entire freaking sport. Don’t get lost. Fly inside your lane, land on the DZ. Thanks in advance. 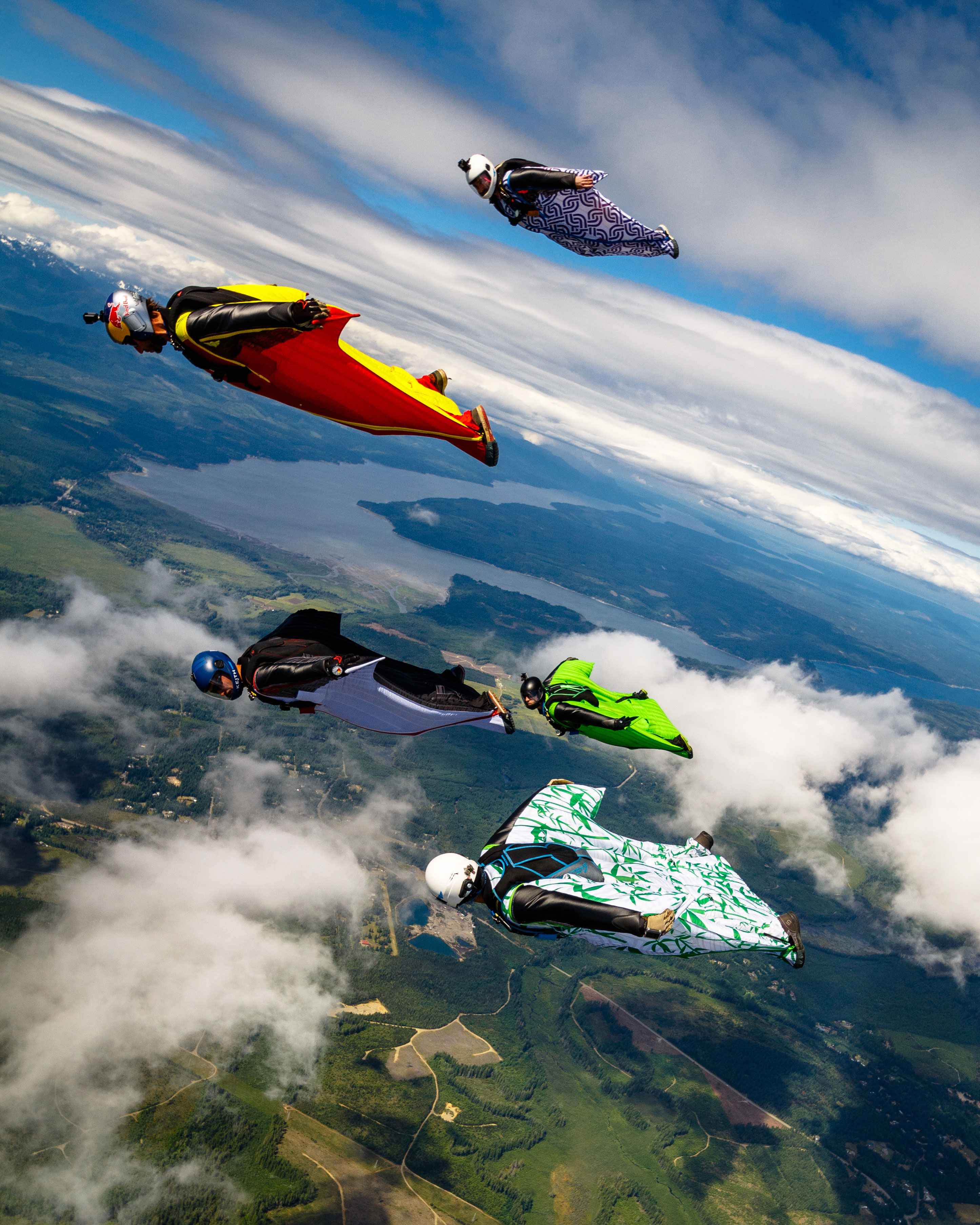 Maintain an awareness of the group — by Next Level

5. Maintaining an awareness of the group

How many people are in the group? Where are they? As group size increases it becomes more important for each person to fly in control, because it rapidly becomes impossible to keep track of everyone in your formation. Secondly, you often cannot see most of the people in the formation even if it is as small as a 5-way, depending on your slot. What this means is that you have to trust the people around you to maintain heading, speed, and directional control in order to prevent a collisions within the group.

Think about these points the next time you are part of a hastily planned, or unplanned, zoo load that includes a few people you don’t know, and think about what a responsible free-fly organizer would say to random jumpers who walk into the loading area and say “hey guys, I think I can fly head down pretty good or like whatever, so can I be a part of your cool jump?” Most of the time the polite and professional answer should be, “We’d love to jump with you on a future load after talking about your experience and finding a slot for you in an appropriate group.”

Other skydiving disciplines take these points seriously, and wingsuit pilots should, too. The closing speeds that are possible in wingsuits are scary – equal to or greater than the closing speeds that occur when a freeflyer “corks” in the middle of a crowded vertical formation. We, the wingsuit community, need to start taking this point more seriously.

Once again, the idea is to finish the jump without crashing into anyone else. As you change your heading at breakoff, do so while maintaining the AoA and speed of the formation. Only once you have cleared the airspace ahead of and around you on your new heading should you consider changing your speed and angle, if necessary. As with any skydive involving horizontal movement, no one should break more than 90 degrees off of the formation’s line of flight.

If you haven’t yet, read here, and here. 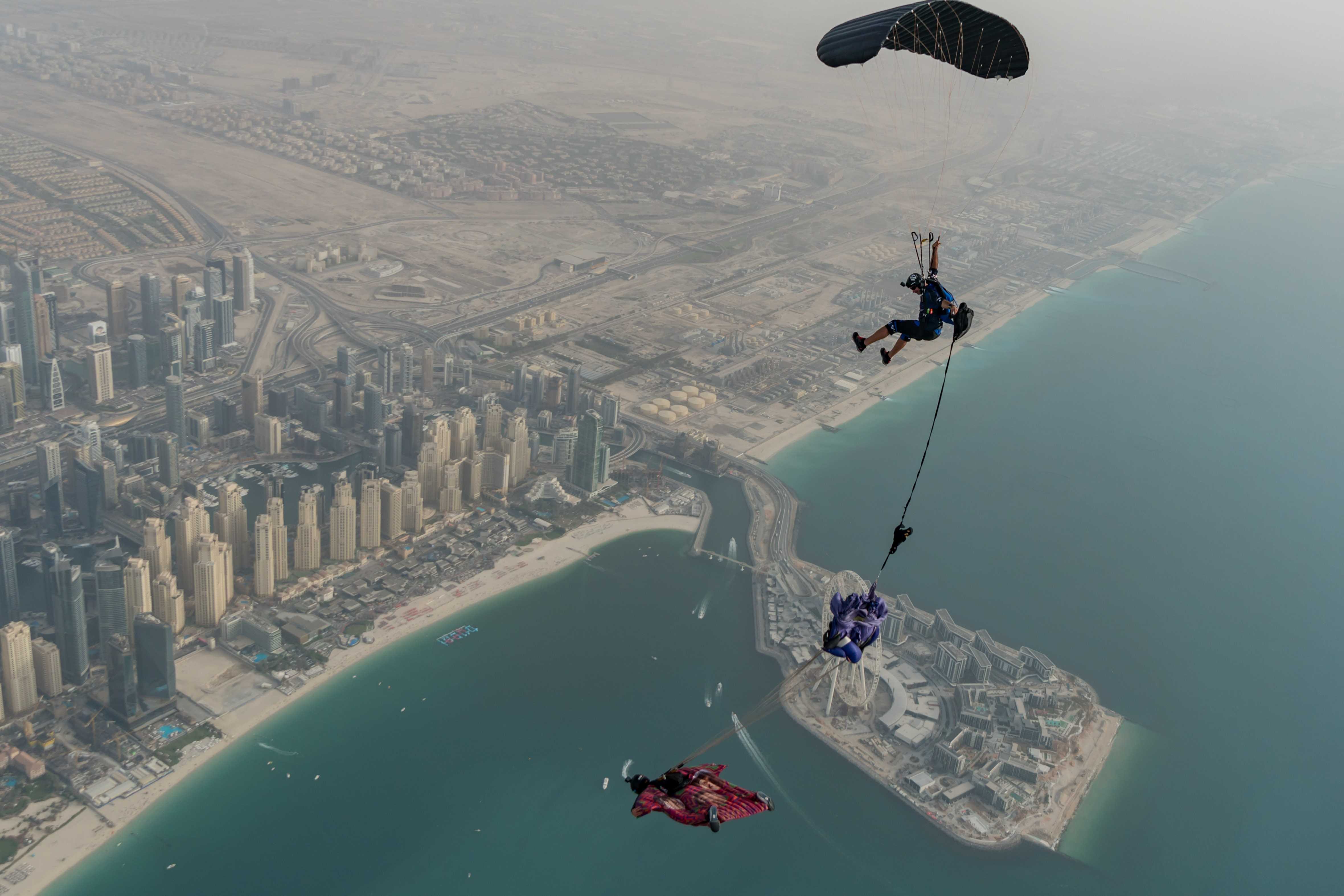 A bridle in the 8-9’ range is important. Pilots `Matt Munting (WS) & Pablo Hernandez — by Nicholas Scalbrino

You should be using a docile, low aspect ratio, 7-cell main, loaded at less than around 1.3. By now this has, like the knowledge that cigarettes aren't good for you, become conventional wisdom. Anyone jumping a 9-cell or highly loaded anything is either a fan of dangerous openings, or kidding themselves about the risk.

A bridle in the 8-9’ range is important, and a PC in the 28-32” range is critical. Also, semi-stowless d-bags have proven to yield better openings than bags with 6+ rubber-band stows. 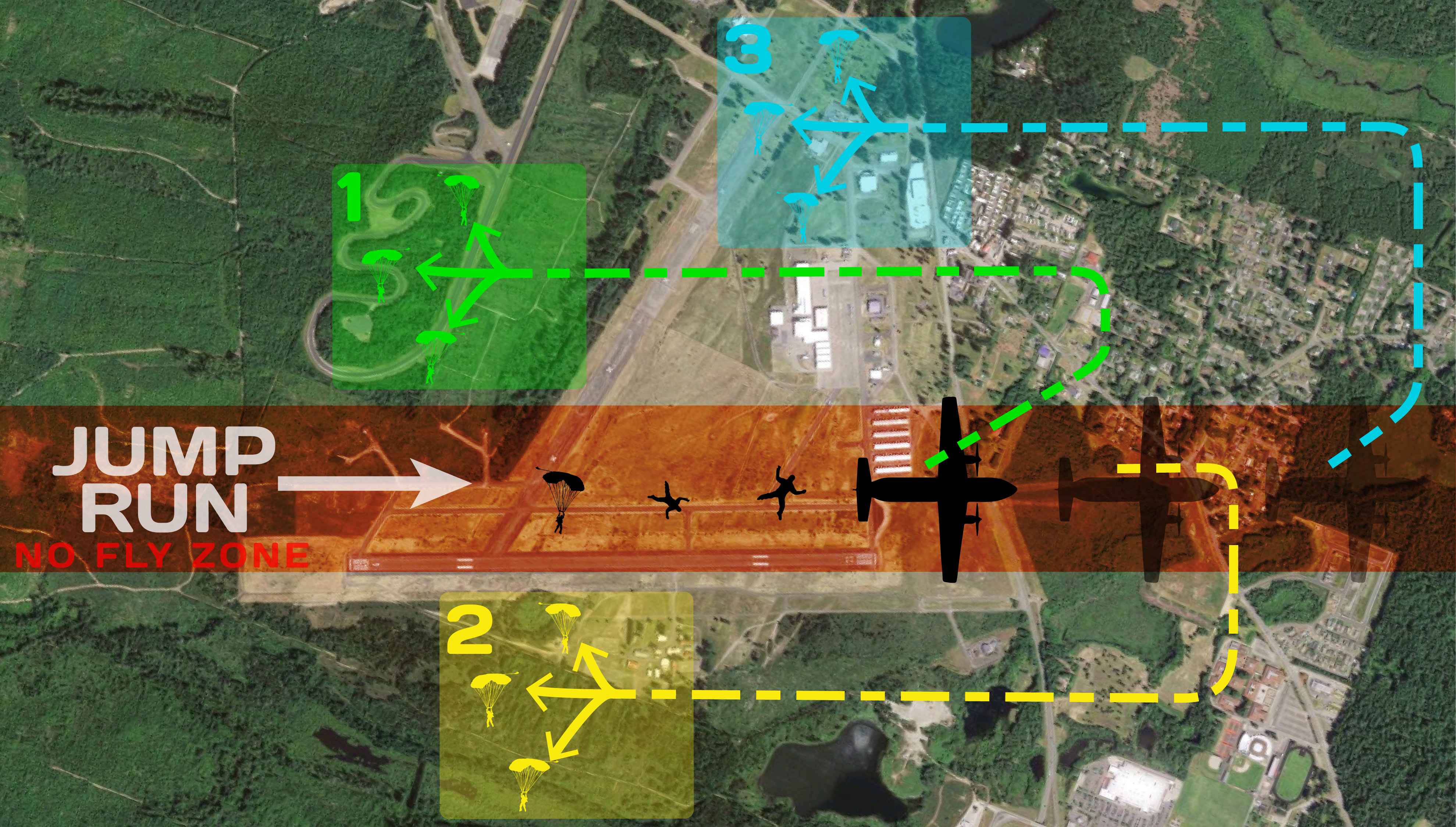 Once we’ve navigated along our pre-planned line of flight, with awareness of other groups, and we’re returning to the DZ, we can expect there to be canopy traffic. There will be tandems in the air, students, high-pullers, and there could be parachutists from other loads if there are multiple aircrafts running that day. Here’s an incredibly dumb and all-too-common technique: Finishing a super fun wingsuit multi-way with some backflying and messing around after break-off, bombing down jump-run at around 4,500 feet. Sound familiar? Low, fast, not looking where you’re going, and pointed at the landing area where every other person under canopy is headed.

Remember that there may be other loads: At many DZs, manifesters might not be fully aware of how long a wingsuit can stay aloft, which means that aircraft dropping loads behind you could deliver many more parachutes onto jump run before you’ve made it back to the DZ. If there is another plane flying, or the potential for one to be flying, assume that the normal jump-run opening zone will have parachutes in it.

Tandems - they have the right of way at pretty much every DZ we have ever been to. Know that if they are on your plane, they will be in the air with you both while wingsuiting back to the DZ, and while landing. Know the rules, plan your pattern, and yield to them.

This article is one of a 4-part series by Matt Gerdes and Taya Weiss on Wingsuit Progression. Here are links to the other articles: