Our most heartfelt congratulations to Chris Geiler, new World Champion. He was joined on the podium by Alexey Galda (Silver) and Luke Rogers (Bronze). Joe Ridler and Jason Dodunski rounded out the top 5. Team USA took Gold in the Nations category. All 5 top pilots flew SQRL. 15 out of the top 16 pilots flew SQRL. And every pilot on the Nations podium flew SQRL.

This was the first year that the FAI awarded medals for individual tasks, which meant that Chris, Alexey, and Luke went home with a lot of metal hanging from their necks. Chris took home five FAI medals: Overall Gold, Nations Gold (USA), and Silver medals in Distance, Time, and Speed. Luke and Alexey also picked up Gold medals for Distance and Time, respectively, in addition to their overall podium and nations category medals.

No FAI world event is free of drama, and 2022 was no exception. After Alexey Galda revealed his 3D printed gripper extensions shortly before the event, it set off a scramble amongst a few pilots to replicate the addition to their suits in order to compete in time and distance. The gripper extensions reduced sink rate enough to make a significant improvement to time and distance scores, while reducing the speed score – an obvious tradeoff for the overall title. An informal poll at the event indicated that rigid wing extensions are not favored by competitors and may be banned or restricted in future. We’re excited to see the level of flying increasing so significantly as well as the innovations being explored by pilots in our sport.

A huge thanks to everyone who gave their time and energy to participate in this highest level event, and to all of the pilots who flew SQRL. It is a tremendous honor for us to be able to support virtually all of the world’s top pilots. 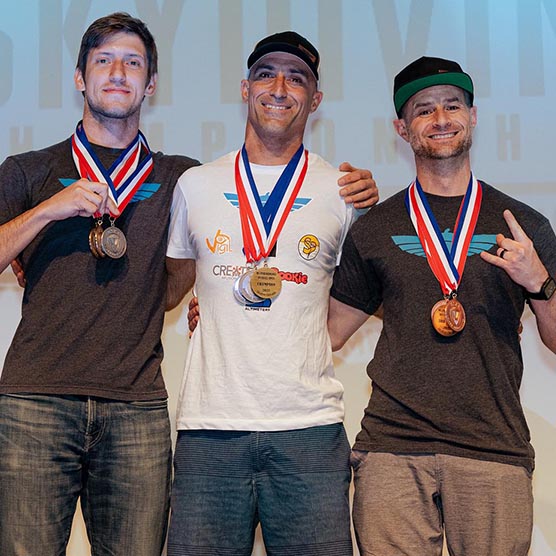