Sink steep approaches into technical BASE LZs with ease. This new canopy offers deep-brake and slow-flight performance in an agile and efficient design with tight handling and improved glide & flare performance.

HAYDUKE LITE represents what we think is an ideal balance of performance and passive safety. HAYDUKE LITE offers improved glide, yet retains the benefit of slow forward speed in DBS. The result: more time for object avoidance in the case of an off-heading, with agile handling that allows for fast, easy, and efficient (low sink rate) turns using risers or brakes.

Science & Observation: HAYDUKE LITE is the result of three years of R&D combined with customer and team jumper feedback. You tell, we listen. The result is progression that can be felt and experienced.

Inspired by a paraglider design, this key innovation has been an important part of the OUTLAW’s slow stall speed and forgiving deep-brake characteristics. We have tuned the concept and applied a widened and lower-volume Float-Flap array to HAYDUKE LITE. This feeds a wider portion of the span with a lower volume of air. 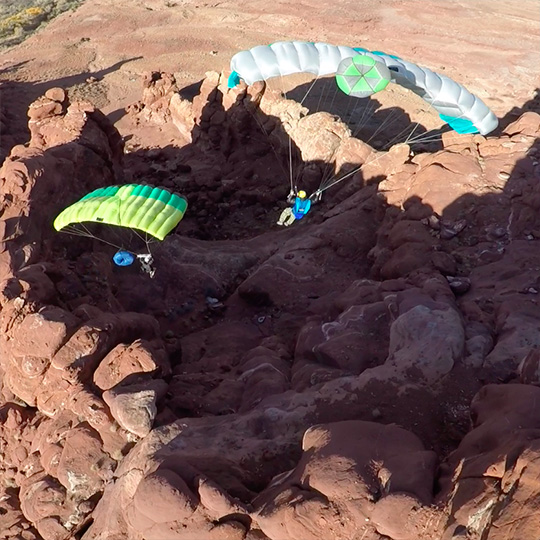 The slat system helps to increase airflow over the top surface of the canopy. HAYDUKE LITE’s slat spans three center cells instead of one, and combined with the the Float-Flap system, a large portion of the top surface is fed with laminar flow at high angles of attack (deep brakes applied). 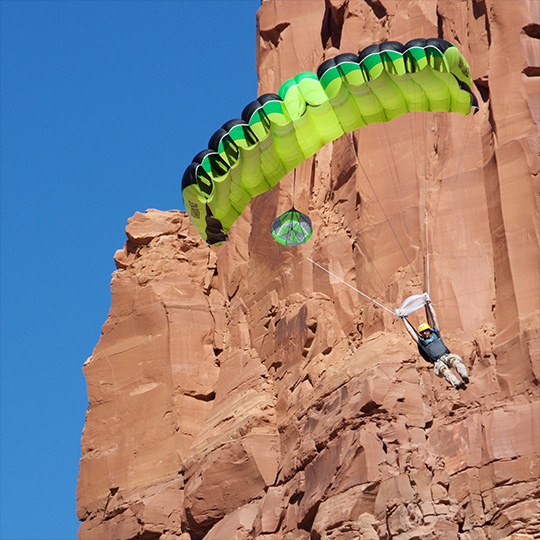 HAYDUKE LITE’s upper brake cascade is constructed without loop to loop junctions. Finger-trapped lines allow a more consistent flex and prevent the acute-angle "kinks" that can lead to tension knots in the brake cascade. The benefits of the OUTLAW's smooth brake fan are apparent when stowing the lines – the brake line junction curves more smoothly in concert with the rest of your lines, reducing the chances of tension knots. Always use a tailgate, slider-gate, or tail-restricting device in conjunction with packing methods that properly stage tail expansion. 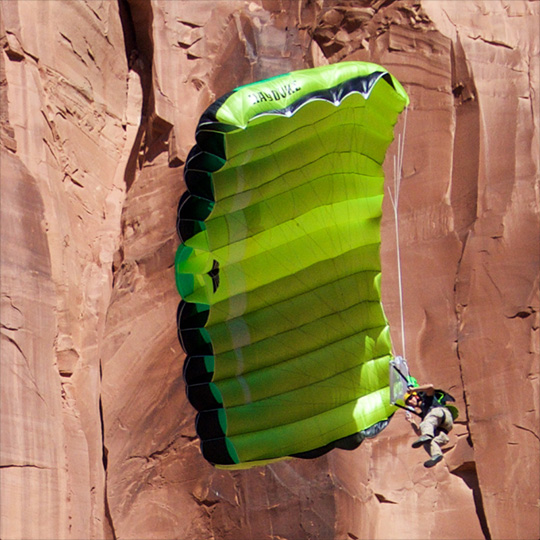 Longevity: Non-coated (permeable) cloth degrades more quickly, and the porosity increases. As porosity at the leading edge increases, all things suffer: Glide worsens, flare weakens, and openings change. It is a simple fact that a BASE canopy with a ZP LE performs better and lasts longer than one without.

Flare: A majority of lift is created at the leading edge of the airfoil – it is the most critical part of the chord. As permeable cloth degrades, lift and performance degrade. ZP nose canopies, all other factors being equal, flare better over a longer lifespan.

Glide performance: Air that permeates the leading edge decreases the pressure difference right where, again, most of the lift is generated. Less lift = less glide.

Openings: Any air that flows through the parachute does not aid in expansion or inflation. While permeable cloth is overall a benefit to opening characteristics, adding some ZP is a benefit to early span and chord expansion. In short, ZP nose canopies open faster.

Packing: You’re a grown-up (sort of) and we believe in you. You can figure out how to pack a parachute that has a few centimeters of ZP on the leading edge. It takes most people about five packjobs to dial it in.

There are many benefits to light-weight canopies. Checkout our Light Fabrics Article to learn more about the benefits.

Faster extraction: A lighter parachute can be extracted more efficiently and has an advantage over standard weight canopies in the first seconds of deployment.

Easier to pack: Porcher PN9 lies flatter, has less tendency to expand or squirm, and is easier to fold.

Easier to carry: Everyone likes arriving at the exit point with a bit more energy.

*If you are unsure of your Exit Weight, you can add 8kg/18lbs to your naked weight as an estimate.