The Aura has rapidly become the most popular wingsuit amongst the world's leading BASE jumpers. In the past two seasons, more new exits and lines of flight have been opened with the Aura than with any other suit. The AURA remains the optimum choice for serious wingsuit BASE jumpers.

The Aura offers the best balance of high performance glide and agility that we have ever experienced. Our mission for the Aura was to create a suit that satisfies the needs of the most demanding wingsuit BASE pilots in the world - jumpers who are pushing the limits of short starts and long glides at new cliffs all over the world, from the French Alps to the American Southwest.

After a lengthy development process and extensive testing by Squirrel and our Team Pilots over the past two years, we are happy to say that the result is even better than we'd hoped; not only is this a suit which is undeniably at the top of its class in terms of glide, but it has also retained an incredible level of agility and stability through a wide range of speeds.

The Aura is a highly versatile, high performance wingsuit, with the ability to dive down to steep lines or reach the most distant landing areas. In 2014, the Aura remains the number one choice of expert wingsuit BASE jumpers around the world. Scroll down on this page to learn more about the suit's design.

The Aura is the ultimate suit with which to open technical new exit points. If it's short and positive, then this is the suit we want to be flying. Even before its official release, the Aura had been used to open many highly technical jumps in the Alps. Its start arc is the shortest that we have seen.

There is not a large difference in surface area between the Colugo and the Aura, but it is important to realize that small differences in wingsuit design can be very significant. The increased surface area, combined with a slightly different profile, has led to noticeably shorter starts, and increased glide performance.

The Aura is only bigger than the Colugo in the arm wing near the end of the span. The added surface area at the wingtip creates a more powerful feel in steep banked turns, and provides an enhanced feeling of authority in all maneuvers. Plenty of suits can be thrown from side to side, but the incredible lack of "slide" in the turn is what makes the Aura special in terms of handling. The extended gripper length and the amount of power in the wingtip is a major reason why the Aura is reserved for pilots of Advanced-Expert abilities.

The relationship between the arm wing and leg wing volumes has been slightly modified from the Colugo. We can't say more, but suffice it to say that no suit with such a thin profile (for speed) has ever started so quickly in the BASE environment.

No amount of performance is worth a compromise in safety. Since the release of our first suit, we have heard people comment on the speed, the glide, and it's overall performance most of all. However, we feel that one of the most important aspects is the carefully engineered easy BOC access. The moderate thickness of the arm wing, the arced wrist, and the flexible sleeve are all crucial ingredients, and we have carried this ultra-clean pull over to the Aura. In our opinion the pull is cleaner than most other wingsuits of smaller size.

The Aura's profile was chosen for its versatility. The suit remains stable at a wide range of angles of attack. Watch the videos of our team pilots diving the suit at nearly 1:1, and then carving through every glide angle all the way up to 3.5:1 and above. The leading edge remains flexible at the wrist, but is static from the mid-forearm all the way to the shoulder to prevent profile deformation. While in flight, a slight flutter / deformation of the Glideskin material at the leading edge is normal.

Experienced wingsuit flyers with several seasons of experience should be able to adapt to the Aura within 30-40 jumps. Respecting the learning curve is essential, but the payoff is a suit with an incredible amount of inherent performance. Do not expect the Aura to be "magic", or to change your life overnight. You will need to put in the time to learn to fly it, but we promise it will be worth the effort and future generations of this suit and our other suits will then be very intuitive for you to fly.

The Aura has a very wide and easily accessible speed range. It responds very well to aggressive de-arching for slow speed flight, making it ideal for XRW. It also remains stable in flocking positions (positions of reduced efficiency and increased stability). In general, the Aura is a lot of fun to skydive and is an excellent choice for experienced flyers - even those who have no desire to BASE jump.

A NOTE ON BIG WINGSUITS

As "big" suits have grown in popularity, a myth has developed in the wingsuit BASE world. This myth is that "bigger is better". More and more jumpers seem to think that the bigger suit they jump, the better flights they are going to have. Or maybe it's as simple as thinking that they will appear to be more experienced if they are seen jumping the newest biggest suit on the market.

We would like to bust this myth, and help BASE jumpers to realize that bigger is not always better, and that we can fly lines with more agility and control in a suit with a more manageable surface area. There are specific instances where the largest suit can be very useful, but those situations are rare. We're not saying that smaller is better, we'd just like to dispel the myth that everyone should be working toward getting the biggest suit out there. The best lines that we have flown have been in more moderately sized suits.

Giant wingsuits are interesting to look at, but our mission with the Aura is to perfect a suit in the >100% range of possible surface area (100% being maximum arm and leg span area), while maintaining a solid amount of speed and agility for realistic application to BASE jumping. No amount of performance is worth sacrificing agility for, and the Aura has the glide of a larger suit with the speed and handling you need to fly safely in the BASE environment.

Main Surfaces: Our main concern was finding an ideal ratio between weight and durability, along with high mechanical stability and good results in stretch and tear tests. Our main surface fabric is a 210D Ripstop, with very low stretch, and a good rigidity to comfort ratio.

Internal Ribs: All ribs are constructed from the renowned Porcher Skytex 40, which has an unparalleled stability-to-weight ratio. 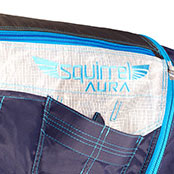 Our 3D reinforced inlet, with maximum intake to drag ratio. We believe that this inlet is one of the most important safety innovations featured on our suits. 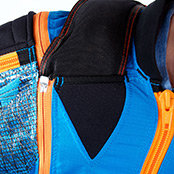 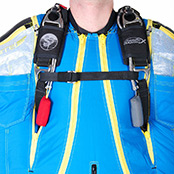 Even if your focus is BASE jumping, it's important to be able to skydive your suit safely. While in skydive mode, handles are completely exposed at the chest and easy to access. For more info regarding this system's use in the skydive environment, click here. 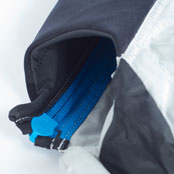 Rapid Arm Deployment. An incredibly simple arced cut at the wrist makes it even easier to both reach your PC at pull time, and your toggles during opening. This basic innovation is an improvement to any wingsuit and makes the BOC pull safe and intuitive. 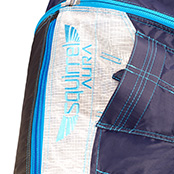 The bottom surface of the leading edge is Mylar-reinforced to maintain profile structure and proper feeding of the inlets. 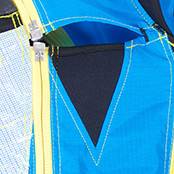 When flying in BASE mode, these flexible panels at the shoulders relieve stress on your suit during openings. Also, bar-tacks at key areas help to prevent seam failure. 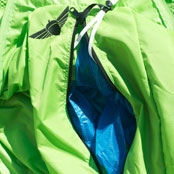 A mesh leg wing pocket, for your nuts and stuff. Store your gear close to your center of gravity without having it affect the fit of your suit. 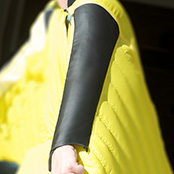 A standard feature on certain models. This highly flexible, durable, and wrinkle-free material is ideal for the leading edge. Static (non-flexible) internal construction prevents leading edge deformation, meaning that the arm is flexible at the wrist area, but the profile is stable. 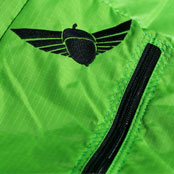 All of our suits are built to the most exacting specifications, and tested for airtight symmetry in our production facility at multiple points along the construction process. The end result is the highest build quality that we have ever seen. 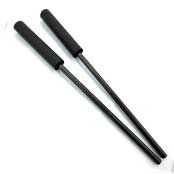 Ultralight and ultrastiff, these gripper sticks feel and perform better than any material we have tried. We're offering this expensive upgrade as a standard option on all of our suits. 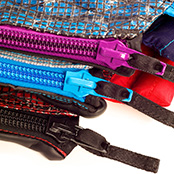 We want your suit to look good. And not like other suits. We've ordered custom color YKK #10 Coil zips that will be standard on all suits, at no extra charge. Choose between five different colors when you order.

Every suit comes standard with a Carbon Aero Jack hook knife installed on the front of the suit, in a location that is ideal for jumping your wingsuit with your BASE harness inside the suit, in BASE mode.